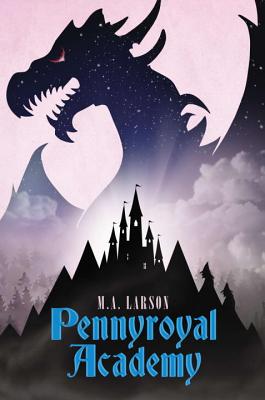 A girl from the forest arrives in a bustling kingdom with no name and no idea why she is there, only to find herself at the center of a world at war. She enlists at Pennyroyal Academy, where princesses and knights are trained to battle the two great menaces of the day: witches and dragons. There, given the name “Evie,” she must endure a harsh training regimen under the steel glare of her Fairy Drillsergeant, while also navigating an entirely new world of friends and enemies. As Evie learns what it truly means to be a princess, she realizes surprising things about herself and her family, about human compassion and inhuman cruelty. And with the witch forces moving nearer, she discovers that the war between princesses and witches is much more personal than she could ever have imagined.

“M. A. Larson has created a magical world of adventure—a world that shows who princesses truly are: people of character and courage and strength. No one rescues Pennyroyal princesses; they rescue themselves.”—Reese Witherspoon

“‘Pennyroyal Academy’ is one of those books you want to parse out and make last. It is a breathtakingly exciting novel, and Evie deserves a special place in a new pantheon of capable, feisty, and yes, admirable literary princesses.”—The New York Times Book Review

“Forget the notion of traditional princesses… Larson has crafted a dark Grimm-like fairy tale, with teens training to defeat evil, save villages, and find their own identities in the process… Larson has left the door open for a welcome second year at Pennyroyal with Evie and her friends.”—Booklist

“[Larson] playfully nods to classic fairy tales… but he also imbues the fantasy with an important, affirming message for readers: ‘You get to decide what you want to be. No one else.’ ”—Publishers Weekly

“A perfect fit for fans of Hale’s Princess Academy and the novels of Gail Carson Levine.”—BCCB

M.A. Larson is a film and television writer who lives with his wife, daughters, and two dogs in a canyon in California.  Larson has written for Cartoon Network, Disney Channel, Disney XD, Disney UK, Discovery Kids Channel, The Hub, and Nickelodeon. As a writer on the cult sensation My Little Pony: Friendship is Magic, he has been a guest at “brony” fan conventions from Paris, France to Dallas, Texas. This is his first novel. Larson can be found on twitter at @M_A_Larson, where he frequently tweets about classic films and magical candy-colored ponies.
Loading...
or
Not Currently Available for Direct Purchase