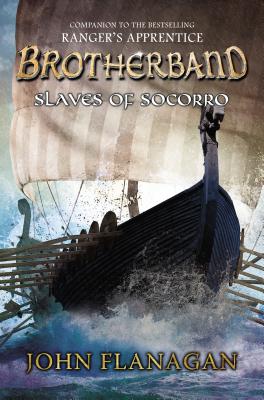 From the author of the mega-selling Ranger's Apprentice!

Hal and his fellow Herons have returned home to Skandia after defeating the pirate captain Zavac and reclaiming Skandia's most prized artifact, the Andomal. With their honor restored, the Herons turn to a new mission: tracking down an old rival turned bitter enemy. Tursgud—leader of the Shark Brotherband and Hal's constant opponent—has turned from a bullying youth into a pirate and slave trader. After Tursgud captures twelve Araluen villagers to sell as slaves, the Heron crew sails into action . . . with the help of one of Araluen's finest Rangers!

In this fourth book in the Brotherband Chronicles, a new battle unfolds as old rivalries are renewed, peace treaties are put to the test, and the action builds to a pulse-pounding finale. Perfect for fans of J.R.R. Tolkien’s Lord of the Rings, T.H. White’s The Sword in the Stone, Christopher Paolini’s Eragon series, and George R. R. Martin’s Game of Thrones / A Song of Ice and Fire series.

Praise for Brotherband 4: Slaves of Socorro:

"A sweeping novel of adventure, written with wit and a sure sense of storytelling." —Booklist

John Flanagan grew up in Sydney, Australia, hoping to be a writer. John began writing The Ruins of Gorlan, the first in the mega-selling Ranger’s Apprentice series, for his son, Michael, and is still hard at work on the series and its spinoff, Brotherband Chronicles. He currently lives in the suburb of Manly, Australia, with his wife. In addition to their son, they have two grown daughters and four grandsons.

Praise For Slaves of Socorro (The Brotherband Chronicles #4)…

Praise for Brotherband 4: Slaves of Socorro:

"A sweeping novel of adventure, written with wit and a sure sense of storytelling." —Booklist