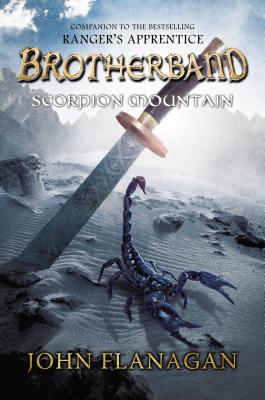 From John Flanagan, author of the worldwide bestselling Ranger's Apprentice -- an all-new adventure featuring the Brotherband crew and one of our favorite Rangers!

Hal, his Brotherband crew, and the Ranger Gilan have freed the twelve Araluens sold into slavery. Returning to Araluen, Gilan is given a new mission by King Duncan: protect his daughter’s life. Princess Cassandra has survived one attempt on her life already, and now whispers of a second attempt have reached the kingdom. A deadly sect known as the Scorpion Cult is thought to be behind the assassination threat.

Not waiting to see if the knife will strike true, the Brotherband again team up with Gilan to track down the would-be killers.

In this fifth book in the Brotherband Chronicles, old friends reemerge to take on new enemies as the worlds of Ranger’s Apprentice and Brotherband join forces in battle!

John Flanagan grew up in Sydney, Australia, hoping to be a writer, and after a successful career in advertising and television, he began writing a series of short stories for his son, Michael, in order to encourage him to read. Those stories would eventually become The Ruins of Gorlan, Book 1 of the Ranger’s Apprentice epic. Now with his companion series, Brotherband Chronicles, the novels of John Flanagan have sold millions of copies and made readers of kids the world over. Mr. Flanagan lives in the suburb of Manly, Australia, with his wife. In addition to their son, they have two grown daughters and four grandsons.