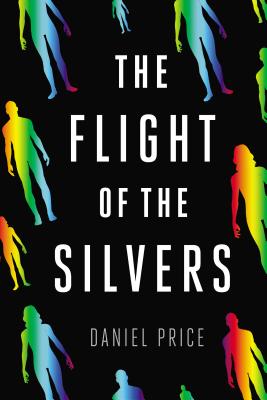 The Flight of the Silvers (Hardcover)

I could list the wonders of this new world for a while, but I d rather let you discover them for yourself when you read the book. You should read this book I loved "The Flight of the Silvers." I found it very difficult to put it aside to deal with my own life It really is an amazing book. SF Crow's Nest

Without warning, the world comes to an end for Hannah and Amanda Given. The sky looms frigid white. The electricity falters. Airplanes everywhere crash to the ground. But the Givens are saved by mysterious strangers, three fearsome and beautiful beings who force a plain silver bracelet onto each sister's wrist. Within moments, the sky comes down in a crushing sheet of light and everything around them is gone.
Shielded from the devastation by their silver adornments, the Givens suddenly find themselves elsewhere, a strange new Earth where restaurants move through the air like flying saucers and the fabric of time is manipulated by common household appliances.
Soon Hannah and Amanda are joined by four other survivors from their world a mordant cartoonist, a shy teenage girl, a brilliant young Australian, and a troubled ex-prodigy. Hunted by enemies they never knew they had and afflicted with temporal abilities they never wanted, the sisters and their companions begin a cross-country journey to find the one man who can save them before time runs out.

"The Flight of the Silvers "is a fabulous piece of speculative fiction. Its opening chapter is completely captivating, introducing Amanda and Hannah in a way that is unforgettable This is an intricately plotted novel and it is also a beautifully written one. Enjoyable wordplay including the creation of new words and the clever use of phrases make "The Flight of the Silvers "as intellectually engaging as it is fun . It's a substantial book but a hugely enjoyable one and it is extremely difficult to put down. For Winter Nights blog

Daniel Price is a writer living in Los Angeles. Although "The Flight of the Silvers "is his second novel, he has been developing the story for more than fifteen years. You can learn more about him and his books at danielprice.info.

Praise For The Flight of the Silvers…

Praise for THE FLIGHT OF THE SILVERS

“A mind-bending work of science fiction, Flight of the Silvers pairs an excellently paced plot with well-written and fully realized characters. If you’re new to the science fiction world, Daniel Price’s chunkster might just be the book to draw you into the genre.... It’s really the characters that make Flight of the Silvers worth reading. Price took his time carefully constructing and molding each of the main characters. These people leap off the page, with all of their flaws and ugly bits; they’re so incredibly realistic and three dimensional. Even though they’re not perfect, readers will enjoy getting to know each of these characters and understanding them. They are what carry the narrative; as the reader becomes emotionally invested in these characters, it becomes crucial that they survive their ordeals....This is a novel that will impress fans of science fiction, but the great characters will appeal to readers in all genres. You should absolutely plan on picking it up as soon as possible.” --S. Krishna’s Books blog

“An absorbing adventure with a fresh take on both the parallel-universe and the paranormal subgenres. You'll get pulled in.” –Kirkus (starred review)

“Daniel Price has given readers the first installment of what promises to be a well-wrought sci-fi saga, colored by intriguing ideas and complex characters adrift in a wonderfully weird world. The Flight of the Silvers is thought-provoking, cinematic in scope…and very, very good.” --The Maine Edge

“Price deserves credit for creating immediately relatable characters whose motivations are understandable even when not so commendable. But he deserves out-and-out praise for doing so while constantly upping the temporal ante. The reader’s uncertainty concerning the rules of this new world may well mirror that felt by the protagonists, but the shared confusion never ruins the immersion. As a result, any hours spent reading The Flight of the Silvers will be time well spent.” --BookPage

“In The Flight of the Silvers, Daniel Price’s time-bending X-Men travel through an alternative America that is both alien and disturbingly familiar. Fast-paced, poignant, and absorbing.” —Emily Croy Barker, author of The Thinking Woman’s Guide to Real Magic

“The cast is engaging (it includes a 16-year-old Australian boy, a girl who’s been separated from her entire family, and an affable cartoonist), and the author has created an alternate-reality world that is both bewilderingly different and reassuringly familiar…. A highly imaginative exercise in world building that also features characters it’s very easy to care about.” —Booklist

“The Flight of the Silvers is a fabulous piece of speculative fiction. Its opening chapter is completely captivating, introducing Amanda and Hannah in a way that is unforgettable… This is an intricately plotted novel and it is also a beautifully written one. Enjoyable wordplay – including the creation of new words and the clever use of phrases – make The Flight of the Silvers as intellectually engaging as it is fun…. It’s a substantial book but a hugely enjoyable one and it is extremely difficult to put down. There is no doubt that in places it is bonkers. It’s impossible to tell what will happen next but whatever that thing is it will shock, horrify or delight. The air of foreboding is also chilling. All described and told with the lightest of touches and an exuberance.” –For Winter Nights blog

"A roller coaster ride describes this book pretty accurately. Fast-paced, twisty-and-turny, with some peaks and lulls, and ultimately extremely difficult to put down until the very last page. I’ve never read any story quite like it." — The Book Adventures blog

"One of the most entertaining time-travel stories I’ve read in years." — Rosemary & Reading Glasses blog