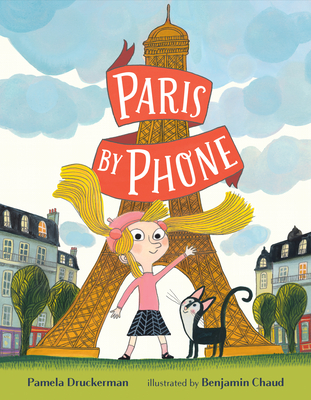 The magic of independence meets the meaning of home in the picture book debut of the #1 bestselling author of Bringing Up Bébé.

When Josephine Harris decides that Paris is where she really belongs, all it takes is a quick call on her magical phone to whisk her away. The city of lights has fancy cafés, baguettes under every arm, the Eiffel Tower, and a fabulous new family who can't wait to show her around.

The city is a feast for the senses, but each new discovery brings a pang of melancholy. There's something missing here. Could it be the person who loves Josephine's best--her own mother?

Pamela Druckerman is the author of five books including the #1 bestseller Bringing Up Bébé: One American Mother Discovers the Wisdom of French Parenting, which has been translated into 30 languages. She writes an opinion column about France for The New York Times, and pens the Dress Code column for 1843/The Economist. She won an Emmy for The Forger, about a French teenager who helped rescue thousands of children during WWII. She lives in Paris.

Benjamin Chaud is a well-known and much-loved French author and illustrator of more than 60 books. He was awarded the Gold Medal by the New York Society of Illustrators in 2014, and nominated for the Astrid Lindgren Memorial Award in 2017 and 2018. He lives in Paris where he specializes in drawing animals that squint.
Loading...
or support indie stores by buying on