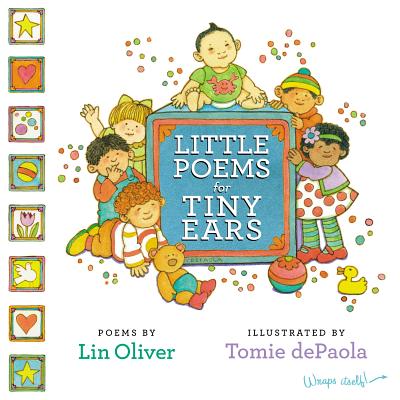 The dynamic, best-selling team of Lin Oliver and Tomie dePaola have created a charming collection of baby poems that makes the perfect gift for baby showers and first birthdays.

For babies and toddlers, each moment is full of wonder and discovery. This delightful collection of original poems celebrates the everyday things that enthrall little ones, such as playing peekaboo, banging pots and pans, splashing at bath time, and cuddling at bedtime. Full of contagious rhythm and rhyme, this inviting picture book introduces young children to the sound of poetry, and beloved illustrator Tomie dePaola’s engaging children are the perfect match for Lin Oliver’s lighthearted poems. Together they’ve created a book to be treasured that captures the magic and fun of being new in the world.

* “Everything about this book is child friendly, beginning with its wrap construction, the covers hugging the inside contents. . . . Highly readable poems about almost every familiar aspect of a young child’s life. . . . The words work in perfect tandem with dePaola’s happy art. . . . Framed to highlight chubby babies and toddlers of all ethnic backgrounds at the center of their world, being active and being loved.” — Booklist, STARRED REVIEW

* “In his distinctively serene illustrations, dePaola portrays children with rounded faces and smiling eyes as they navigate their environments and engage in familiar activities. . . . An ethnically diverse cast of children and the ubiquity of delights that range from beloved pets to a father’s scratchy beard give this warmhearted collection broad appeal.” — Publishers Weekly, STARRED REVIEW

* “Oliver pens a set of poems tailor-made for tiny ears and minds. . . . Spun with whimsy. . . . The poems compel gentle caresses and interaction between adult and child. Varied rhythm and rhyme schemes enrich a baby’s exploration of sound at the time when his or her developing mind needs it most. DePaola’s round-faced babes . . . wrap readers in warmth, while the square frames and initial letters mimic childhood blocks, bringing a touch of comfort and nostalgia to the package. A tenderly crafted collection that captures the joyous individual moments of infant discoveries.” — Kirkus Reviews, STARRED REVIEW

Lin Oliver (www.linoliver.com) is the New York Times bestselling author of over twenty-five books for children. Known for her comic invention and light touch, she has created such series as Hank Zipzer, Ghost Buddy, Almost Identical and Sound Bender. An accomplished writer and producer of family entertainment, Lin is also the co-founder and executive director of the Society of Children’s Book Writers and Illustrators. She lives and works in Los Angeles, where she eats tacos and walks on the beach.

Tomie dePaola (www.tomie.com) is the acclaimed author and/or illustrator of more than 200 books for children. He received the 2012 Original Art Lifetime Achievement Award given by the Society of Illustrators, and he is the recipient of the Children's Literature Legacy Award, given for a substantial and lasting contribution to children’s literature. He has also received the Newbery Honor Award for 26 Fairmount Avenue and the Caldecott Honor Award for Strega Nona. He was awarded the Smithson Medal (from the Smithsonian) and the Regina Medal (from the Catholic Library Association), and was designated a “living treasure” by the state of New Hampshire. His Brava, Strega Nona, Strega Nona’s Harvest, and Strega Nona’s Gift were all New York Times bestsellers. He is the first author known primarily for children’s book writing to be awarded the Sarah Josepha Hale award, a prestigious distinction in writing by a New Englander. He lives in New London, New Hampshire.
Loading...
or
Not Currently Available for Direct Purchase