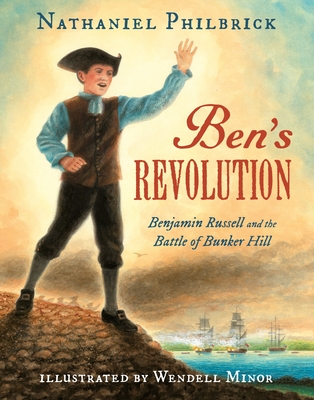 Benjamin Russell and the Battle of Bunker Hill

History comes alive in this gripping account of a young boy caught up in the start of the Revolutionary War. Based on an episode in National Book Award–winning author Nathaniel Philbrick’s New York Times bestseller Bunker Hill: A City, A Siege, A Revolution, this engrossing story allows readers to experience history from a child’s perspective, and Wendell Minor’s stunning paintings will transport readers back to the early days of the Revolutionary War.

Benjamin Russell is in school on the morning of April 19th, 1775, when his teacher announces, “The war’s begun, and you may run!” Ben knew this day was coming; after all, tensions had been mounting between the colonists and the British troops ever since the Boston Tea Party. And now they have finally reached the breaking point. Ben and his friends excitedly rush out of their classroom to bear witness, and follow the throngs of redcoats marching out of Boston toward Concord. Much to Ben’s surprise, Boston is sealed off later that day—leaving the boys stuck outside the city, in the middle of a war, with no way to reach their families. But Ben isn’t worried—he’s eager to help the Patriots! He soon becomes a clerk to the jovial Israel Putnam, a general in the provincial army. For months he watches the militia grow into an organized army, and when the Battle of Bunker Hill erupts, Ben is awed by the bravery of the Patriots, although saddened by the toll war takes. He later goes on to become an apprentice at a Revolutionary newspaper, and it’s a happy day when they get to report on the signing of the Declaration of Independence.

Praise for Bunker Hill: A City, A Siege, A Revolution
“Philbrick guides us beautifully through Revolutionary Boston, with the Battle of Bunker Hill as his story’s grand climax.”—The New York Times Book Review
“Masterly narrative . . . Philbrick tells the complex story superbly . . . gripping book.”—The Wall Street Journal
“A masterpiece of narrative and perspective. . . . This is not only . . . the greatest American story. It is also the American story.”—The Boston Globe
“You will delight in the story and the multitude of details Philbrick offers up.”—USA Today

Praise For Ben's Revolution: Benjamin Russell and the Battle of Bunker Hill…

* “[Philbrick] introduces Benjamin Russell, where he went to school, his part-time apprenticeship at Isaiah Thomas' newspaper, sledding down Beacon Hill, and the British officer who cleaned the cinders from the snow so the boys could sled farther and farther. It is these humanizing touches that make war its own intolerable act. Readers see Benjamin, courtesy of Minor's misty gouache-and-watercolor tableaux, as he becomes stranded outside Boston Neck and becomes a clerk for the patriots. Significant characters are introduced, as is the geography of pre-landfilled Boston, to gain a good sense of why certain actions took place where they did. The final encounter at Breed's Hill demonstrates how a battle can be won by retreating. A crisp historical vignette.”—Kirkus Reviews, starred review

“Acclaimed historian Philbrick (Mayflower: A Story of Courage, Community, and War) has penned a Revolution-era history for kids adapted from his adult title Bunker Hill. . . . Philbrick adds nuance to the tale through, for instance, Ben’s mixed sentiments about the excitement of revolution and the kindness shown to him by a local British officer. . . . The full-color illustrations are full of bright hues, resulting in pleasing grassy fields, morning light flashing off harbor waters, and brilliantly clad Redcoats. Minor depicts the battlefield with motion and smoky haze, yet free of carnage. A convenient map displays the Boston locales referenced. . . . A stirring account of the American Revolution, sure to resonate with elementary students.”—School Library Journal

“Seeing historical events through the eyes of youngsters who were living through them can provide new understandings for today’s youth. . . . The paintings capture the time period and the map helps to place the important locations in perspective.”—School Library Connection

Nathaniel Philbrick (www.nathanielphilbrick.com) is the author of the New York Times bestsellers In the Heart of the Sea (National Book Award); Mayflower (Pulitzer Prize finalist); Bunker Hill (New England Book Award); and most recently Valiant Ambition. His writing has appeared in Vanity Fair, Smithsonian magazine, the New York Times Book Review, the Wall Street Journal, the Los Angeles Times, and the Boston Globe. He has appeared on the Today Show, the Morning Show, Dateline, PBS’s American Experience, C-SPAN, and NPR. He lives in Nantucket, Massachusetts.

Wendell Minor (www.minorart.com)’s popular picture books include Daylight Starlight Wildlife, My Farm Friends, How Big Could Your Pumpkin Grow?, The Buffalo Are Back (by Jean Craighead George), and Look to the Stars (by Buzz Aldrin). His paintings are in the permanent collections of the Norman Rockwell Museum, the Eric Carle Museum of Picture Book Art, Smithsonian National Portrait Gallery, the US Coast Guard, and NASA, and he had a major retrospective, Wendell Minor’s America, at the Norman Rockwell Museum in 2014. He lives in Washington, Connecticut.
or
Not Currently Available for Direct Purchase