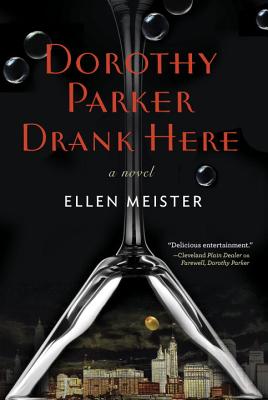 The acid-tongued Dorothy Parker is back and haunting the halls of the Algonquin with her piercing wit, audacious voice, and unexpectedly tender wisdom.
Heavenly peace? No, thank you. Dorothy Parker would rather wander the famous halls of the Algonquin Hotel, drink in hand, searching for someone, anyone, who will keep her company on this side of eternity.
After forty years she thinks she's found the perfect candidate in Ted Shriver, a brilliant literary voice of the 1970s, silenced early in a promising career by a devastating plagiarism scandal. Now a prickly recluse, he hides away in the old hotel slowly dying of cancer, which he refuses to treat. If she can just convince him to sign the infamous guestbook of Percy Coates, Dorothy Parker might be able to persuade the jaded writer to spurn the white light with her.Ted, however, might be the only person living or dead who's more stubborn than Parker, and he rejects her proposal outright.
When a young, ambitious TV producer, Norah Wolfe, enters the hotel in search of Ted Shriver, Parker sees another opportunity to get what she wants. Instead, she and Norah manage to uncover such startling secrets about Ted's past that the future changes for all of them.

Ellen Meisterhas writtenfive novels includingFarewell, Dorothy ParkerandThe Other Life as well as numerous short stories and essays.She teaches creative writing at Hofstra University Continuing Education, and does public speaking about her books and other writing-related issues. Ellen lives on Long Island with her husband and three children."
Loading...
or
Not Currently Available for Direct Purchase