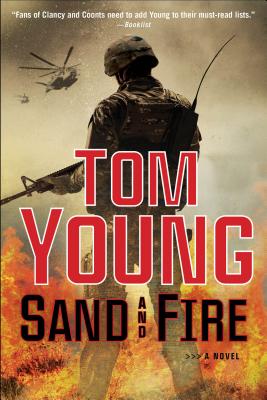 A remarkable military thriller from one of the most widely acclaimed new suspense writers in years Fans of Clancy and Coonts need to add Young to their must-read list (Booklist).
North Africa. A jihadist leader has seized a supply of sarin gas and is wreaking havoc: a nightclub in Sicily, a packed street in Gibraltar. Acting on information, Marine gunnery sergeant A. E. Blount, at six-foot-eight a formidable warrior, the grandson of one of the first black Marines, sets out with his strike force to kill or capture the terrorist.
But it is a trap. Several Marines are killed, some are captured, and the jihadist promises that unless forces withdraw, he will execute one prisoner a day. Immediately, Blount's friends and colleagues Sophia Gold, now with the U.N., and Lieutenant Colonel Michael Parson, working for the United States Africa Command, rush to Libya to help coordinate rescue efforts. The ordeal, however, has only begun. Soon they will all be fighting for their lives in the sand and fire of the desert.


Praise For Sand and Fire…

Praise for The Warriors

“A triumph of the fiction of contemporary warfare. Reading Tom Young gives you the idea of what actual modern combat might be like, not what someone may imagine it to be.” —Alan Cheuse, The Dallas Morning News

“A terrific addition to an exemplary series. Young handles the military thriller logistics like a seasoned pro, but it’s his superior writing that elevates this book.” —Publishers Weekly (starred review)

At the time of his retirement as a senior master sergeant in 2013, Tom Young had logged nearly five thousand hours as a flight engineer for the Air National Guard in Afghanistan, Iraq, Kosovo, Bosnia, and elsewhere. The author of five novels, most recently The Warriors, he lives in Alexandria, Virginia.
Loading...
or
Not Currently Available for Direct Purchase