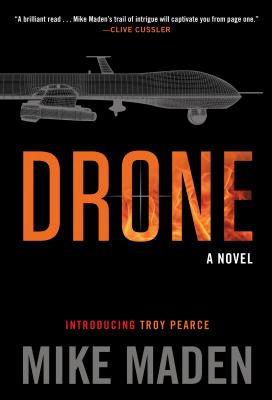 "A brilliant read with astounding plot twists...Maden's trail of intrigue will captivate you from page one." CLIVE CUSSLER"With a fascinating international cast of characters and nonstop action, Mike Maden's Drone kicks off an explosive new thriller series exploring the inescapable consequences of drone warfare."
Troy Pearce is the CEO of Pearce Systems, a private security firm that is the best in the world at drone technologies. A former CIA SOG operative, Pearce used his intelligence and combat skills to hunt down America's sworn enemies in the War on Terror. But after a decade of clandestine special ops, Pearce opted out. Too many of his friends had been sacrificed on the altar of political expediency. Now Pearce and his team chose which battles he will take on by deploying his land, sea, and air drones with surgical precision.
Pearce thinks he's done with the U.S. government for good, until a pair of drug cartel hit men assault a group of American students on American soil. New U.S. president Margaret Meyers then secretly authorizes Pearce Systems to locate and destroy the killers sheltered in Mexico. Pearce and his team go to work, and they are soon thrust into a showdown with the hidden powers behind the El Paso attack unleashing a host of unexpected repercussions.
A Ph.D., lecturer, and consultant on political science and international conflict, Mike Maden has crafted an intense, page-turning novel that is action-packed and frighteningly real blurring the lines between fiction and the reality of a new stage in warfare.

Praise for DRONE by Mike Maden
“A brilliant read with astounding plot twists...Maden's trail of intrigue will captivate you from page one.”
—CLIVE CUSSLER

"Mike Maden understands that sometimes the most lethal warriors are those just out of sight. DRONE is action-packed with cutting-edge technology and an unforgettable cast of characters."
—W.E.B Griffin, #1 Wall Street Journal and New York Times-bestselling author

Mike Maden's lifelong fascination with history and politics ultimately led to a Ph.D. in political science from the University of California, Davis, focusing on the areas of conflict, technology and international relations. After brief stints as a campus lecturer, political consultant and media commentator, Mike turned to studies in theology and a decade of work with a Dallas-based non-profit where he eventually discovered screenwriting. DRONE is the result of a recent challenge by two published friends to try his hand at novel writing.
Loading...
or
Not Currently Available for Direct Purchase