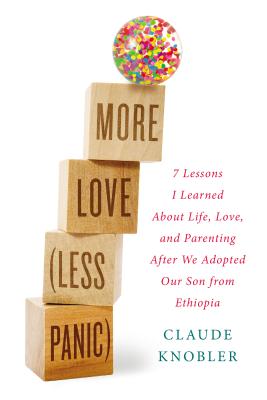 7 Lessons I Learned about Life, Love, and Parenting After We Adopted Our Son from Ethiopia

In this heartwarming and hilarious memoir, Claude Knobler describes how he learned the hard way that the apple actually "can" fall far from the tree and that's Okay.
Already the biologicalparents of a seven-year-old son and a five-year-old daughter, Claude Knobler and his wife decided to adopt Nati, a five-year-old Ethiopian boy who seemed different from Knobler in every conceivable way. After more than five years spent trying to turn his wild, silly, adopted African son into a quiet, neurotic, Jewish guy like himself, Knobler realized the importance of having the courage to love, accept, and let go of his children.
In this wonderfully written memoir, Knobler explains how his experiences raising Nati led him to learn a lesson that applied equally well to parenting his biological children: It's essential to spend the time we are given with our children to love them and enjoy them, rather than push and mold them into who we think they should be.

Claude Knobler s essays have appeared in "Parenting" and on NPR s This I Believe, as well as in one ofthe radio program s literary anthologies, "This I Believe: On Fatherhood," and in Worldwide Orphans Foundation founder Dr. Jane Aronson s "Carried in Our Hearts: The Gift of Adoption: Inspiring Stories of Families Created Across Continents.""
Loading...
or
Not Currently Available for Direct Purchase