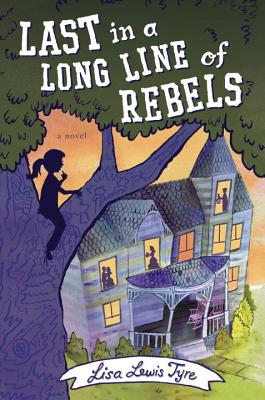 Last in a Long Line of Rebels

Debut novelist Lisa Lewis Tyre vibrantly brings a small town and its outspoken characters to life, as she explores race and other community issues from both the Civil War and the present day.

Lou might be only twelve, but she’s never been one to take things sitting down. So when her Civil War-era house is about to be condemned, she’s determined to save it—either by getting it deemed a historic landmark or by finding the stash of gold rumored to be hidden nearby during the war. As Lou digs into the past, her eyes are opened when she finds that her ancestors ran the gamut of slave owners, renegades, thieves and abolitionists. Meanwhile, some incidents in her town show her that many Civil War era prejudices still survive and that the past can keep repeating itself if we let it. Digging into her past shows Lou that it’s never too late to fight injustice, and she starts to see the real value of understanding and exploring her roots.

Praise For Last in a Long Line of Rebels…

“Louise Duncan Mayhew’s perspective in the 1860s is an intriguing contrast to Lou’s modern narration at the turn of the 21st century. . . . The story addresses injustice in plain language that is accessible to young readers who enjoy whodunits.”—Kirkus Reviews

“Tyre’s debut features characters that are believable in their naïveté and sense of invincibility. . . . Louise’s account of their summer adventures, with chapters headed by entries from a Civil War diary, should please middle-grade readers looking for a solid story with an intriguing historical connection.”—Booklist

“The characters are true to life. . . . In the midst of solving a Civil War–era mystery, Lou and her friends confront racism in their own time. Lou feels deeply and is single-minded in her pursuit of justice. A solid debut novel for middle graders who enjoy a blend of history and mystery.”—School Library Journal

“The rumors of the gold, a found diary, and the arrival of a visitor strangely interested in Lou’s house add up to an engaging amateur sleuth story, complete with a satisfying ending. A fine readalone, this might also provide an approachable and entertaining supplement to a classroom unit on the Civil War.”—The Bulletin of the Center for Children’s Books

“Middle school readers will gain an appreciation for history and mystery as Lou and her friends attempt to unravel her family’s tangled past. . . . As they search for clues, they begin to see how the past is closely linked to the present and that injustice did not stop with the Civil War. The small southern town setting, the engaging characters, the well-developed plot, and the exciting resolution make this a charming coming-of-age debut novel. Diary entries add an authentic historical flavor.”—School Library Connection

Lisa Lewis Tyre (www.lisalewistyre.com) grew up in the tiniest of towns in Tennessee. As a child, she heard a local legend of siblings that found enough Civil War gold in their field to pay off the family farm, and she and her friends spent many hours searching their own backyards for treasure. Lisa now lives in Atlanta and works in Advertising/Social Media consulting.
Loading...
or support indie stores by buying on
(This book is on backorder)