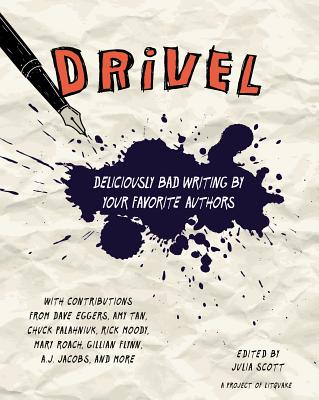 The writing in this book is so bad, it deserves its own taxonomy of suckitude.

Gillian Flynn, Mary Roach, Dave Eggers, Rick Moody, Chuck Palahniuk, Amy Tan, A.J. Jacobs, Daniel Clowes, Jeff Greenwald, Po Bronson…the list goes on. They all sucked once, and they all have the guts to share some of their crappiest early work in Drivel: an uplifting bit of voyeurism, based on the sold-out “Regreturature” stage shows in San Francisco, and brought to you by Litquake and the San Francisco Writers’ Grotto.

Thanks to these courageous but foolhardy writers, the world now knows the real meaning of a work-in-progress.

Praise For Drivel: Deliciously Bad Writing by Your Favorite Authors…

"Whether you’re in it for the entertainment value or the encouragement of knowing that even the best writers once sucked, you’re bound to find something to love in this collection of mostly terrible early work from some of today’s big names.'
--Book Riot

"The book's humor is encouraging; young writers might be inspired to keep working through what might not yet seem to them such deliciously bad writing. Not only hilarious but also somewhat magical."
--SF Weekly

"This endearing anthology of early poems, teenage diaries, college essays, and high school assignments lives up to its bold name. The humorous volume will inspire anyone who enjoys writing and delight those who fondly remember the awkwardness of their teenage years."
--Library Journal

"Before Gillian Flynn wrote the best-­selling novel Gone Girl, she penned a soapy tale of evil triplets inspired by the twins of the 1980s “Sweet Valley High” series. Other highlights presented in this collection are Chuck Palahniuk’s letter to Cambodian leader Pol Pot, written at age ten, in which Palahniuk pretended to be a billionaire industrialist, and Caroline Paul’s haphazard letter to then-president Richard Nixon about animal cruelty. (Included is Nixon’s actual response on White House letterhead.) The primary sources add to the volume’s readability—Amy Tan’s decidedly awful poetry is bolstered by her pretty hand­writing and the embarrassing childhood photographs throughout the book remind readers that their favorite authors had bad hair days (or years), too. Journalist Scott gathered the inspiration for her debut book from the San Francisco–based Regreturature, an annual event at which authors read their most regrettable works. Proceeds of the book benefit Litquake, the literary festival that hosts the event. ­

VERDICT: This endearing anthology of early poems, teenage diaries, college essays, and high school assignments lives up to its bold name. The humorous volume will inspire anyone who enjoys writing and delight those who fondly remember the awkwardness of their teenage years. Ideal for all public library collections."

Editor Julia Scott produces radio documentaries and news features for the BBC World Service and nationally syndicated programs, and writes for newspapers and magazines including The New York Times. Her work has been featured in Best American Science Writing.
Loading...
or
Not Currently Available for Direct Purchase