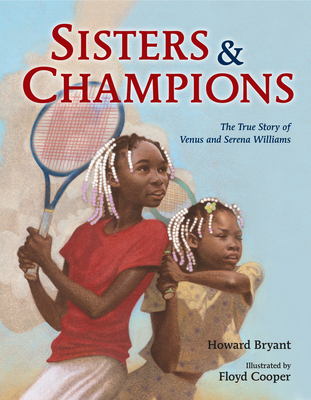 The True Story of Venus and Serena Williams

"This one's a winner." --Chicago Tribune

Everyone knows the names Venus & Serena Williams. They've become synonymous with championships, hard work, and with shaking up the tennis world. This inspirational true story, written by award-winning sports journalist, Howard Bryant, and brought to beautiful life by Coretta Scott Kind Award and Honor winner, Floyd Cooper, details the sisters' journey from a barely-there tennis court in Compton, CA, to Olympic gold medals and becoming the #1 ranked women in the sport of tennis. Here is a worthy ode to Venus and Serena Williams, the incredible sister duo who will go down in history as two of the greatest athletes of all time.

"There is a sharp focus in the book on the two sisters' special bond and friendship; it lies at the heart of this biography, and the women's stories are remarkable. It's high time they had their own picture book tribute."--Kirkus

Praise For Sisters and Champions: The True Story of Venus and Serena Williams…

"Author Bryant brings his considerable sportswriting experience to bear as he energetically shares one of sports' truly remarkable stories with young readers. Cooper's mixed-media paintings done with his reductive technique provide a strong sense of the Williams sisters' image while serving as a forceful compliment....An effective narrative and visual way to share a piece of sports history."
--Kirkus Reviews

"Cooper creates dynamic, naturalistic paintings of the sisters as children, adolescents, and adults on the court and off, setting them against grainy spreads. Bryant details their successes and personal setbacks, and their resilience shines through to the story’s finale..."
--Publishers Weekly

"We all know the ending, but Bryant, a senior writer for ESPN.com, makes the story new again with passion, clarity and a gift for good old-fashioned storytelling. He finds the universal in a very specific sport and tells a tale that’s rich with detail. The illustrations, faintly grainy like old photos, capture the nostalgia of promising beginnings and the intensity of world-class competition. This one’s a winner."
--Chicago Tribune

When Floyd Cooper discovered children's book illustrating, he found a way to complement his career in advertising. An apprentice of Mark English, Mr. Cooper began his freelance career while still a student at the University of Oklahoma. After graduating, he made his way to Missouri, where he secured a position at a greeting card company. Although Mr. Cooper was established in his position there, he felt somewhat stifled. He lacked the freedom and opportunity for spontaneity that he longed for as an artist and the joy that could be found in doing something that he loved. Determined to break out of the mundane cycle he found himself in, Mr. Cooper relocated to the East Coast in 1984 to pursue his career further. It was there that he discovered the world of children's book illustrating and was amazed by the opportunities for creativity it afforded. Mr. Cooper was energized. The first book he illustrated, Grandpa's Face, captivated reviewers. Publishers Weekly said of newcomer Floyd Cooper's work, "Cooper, in his first picture book, creates family scenes of extraordinary illumination. He reinforces in the pictures the feelings of warmth and affection that exist between generations."
Loading...
or support indie stores by buying on