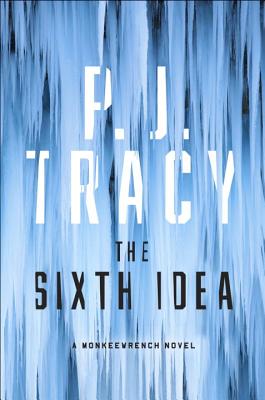 The Sixth Idea (A Monkeewrench Novel #7)

The Monkeewrench crew returns in a twisty, heart-stopping new thriller.

The peaceful Christmas season in Minneapolis is shattered when two friends, Chuck Spencer and Wally Luntz, scheduled to meet in person for the first time, are murdered on the same night, two hours and several miles apart, dramatically concluding winter vacation for homicide detectives Leo Magozzi and Gino Rolseth.
An hour north of Minneapolis, Lydia Ascher comes home to find two dead men in her basement. When Leo and Gino discover her connection to their current cases, they suspect that she is a target, too. The same day, an elderly, terminally ill man is kidnapped from his home, an Alzheimer’s patient goes missing from his care facility, and a baffling link among all the crimes emerges.
This series of inexplicable events sends the detectives sixty years into the past to search for answers—and straight to Grace MacBride’s Monkeewrench, a group of eccentric computer geniuses who devote their time and resources to helping the cops solve the unsolvable. What they find is an unimaginable horror—a dormant Armageddon that might be activated at any moment unless Grace and her partners Annie, Roadrunner, and Harley Davidson, along with Leo and Gino, can find a way to stop it.

Praise For The Sixth Idea (A Monkeewrench Novel #7)…

Praise for The Sixth Idea

“A solid series that combines lighthearted characters and storytelling with serious mysteries.”—Booklist

“Entertaining…The Monkeewrench gang need all their various skills to track other descendants, protect Lydia, uncover a clever conspiracy, and help end the carnage in this successful mix of detection and thriller.”—Publishers Weekly

P. J. Tracy is the pseudonym of the mother-daughter writing team of Patricia Lambrecht and Traci Lambrecht. They both live in Minnesota, outside Minneapolis.
Loading...
or
Not Currently Available for Direct Purchase