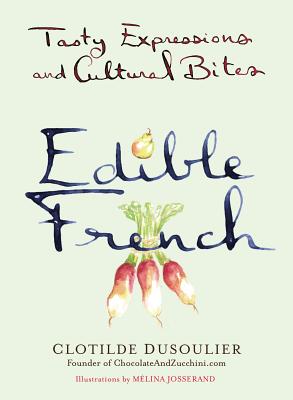 The idiosyncrasies of language can tell us a lot about a culture. In this delightful book, Clotilde Dusoulier, creator of the award-winning food blog Chocolate & Zucchini, delves into the history and meaning of fifty of the French language’s most popular food-related expressions.

A treat of a read for Francophiles and food lovers alike, Edible French is the tastiest way to explore French culture—one that will leave you in high spirits—or, as the French say, vous donnera la pêche (give you the peach).

Reviews for Chocolate and Zucchini:

“Clotilde Dusoulier, a young French woman who discovered her love for food in the United States, shares with readers her lighthearted, enthusiastic, and thoroughly modern approach to a very personal culinary passion.”
—Susan Herrmann Loomis, author of On Rue Tatin and The French Farmhouse Cookbook

"This collection of remarkably accomplished recipes, from market-fresh salads to indulgent desserts, includes a soupçon of tasty tales and tips from Clotilde’s Parisian kitchen, and is sure to inspire readers and cooks no matter where they live."
—David Lebovitz, author of The Perfect Scoop and Room For Dessert

"Is there any food lover who doesn't dream about living, cooking, and eating in Paris? This charming homage to French home cooking feeds that fantasy with a feast."
—Melissa Clark

“Clotilde Dusoulier’s comfortable, homey food has just the right amount of authentic French flair, and her stories of life in Paris speak to food’s universal ability to bring people together and make them happy. Of course, being transported to Paris never hurts either.”
—Dave Lieberman


Reviews for The French Market Cookbook:

“Vegetable dishes at their brightest and most imaginative! Clotilde adds a touch of surprise to every recipe. Who needs beef in shepherd’s pie when you can have lentils and broccoli? Not Clotilde . . . and now not moi.”
—Dorie Greenspan

“ ‘Food blogger’ doesn’t do Clotilde Dusoulier justice. True, she’s amassed a cult following with her pioneering website, but she’s also a journalist with her finger on the pulse of Parisian culture—and an expert and wholly original cook. With its delicious, vegetable-driven take on French cuisine, The French Market Cookbook is a triumph of all Dusoulier brings to the table, as enlightened and joyous as the woman behind it.”
—Dan Barber

“Coaxing out each ingredient's true, rich flavor remains the book's greatest triumph … Dusoulier's refreshingly simple, yet comprehensive, manual urges that we go to the market to "be surprised and seduced by the ingredients," to which we answer "oui."”
—Saveur.com

“We know the French have a way with butter, cheese and wine, but they're also supertalented with preparing green beans, eggplant and cabbage. And while "healthy French food" may sound like an oxymoron, Clotilde Dusoulier, who lives in Paris and writes the blog Chocolate and Zucchini, promises veggies don't have to be doused in cream or mixed with a pile of pasta to taste delicious.”
– Oprah.com, The Best Cookbooks of Summer 2013

“If you can’t make it to France this summer, The French Market Cookbook by Clotilde Dusoulier will teach your Union Square spoils to speak francais. No heavy white sauces or elaborate steps here, just regional, ingredient-driven, rustic-elegant fare … Get the taste of jealousy out of your mouth with cherry-rose compote or peach clafoutis, ooh la la.”
– Edible Manhattan

"Vibrant photographs throughout highlight the textures, colors, and simplicity of Dusoulier's fare and will inspire readers to either cook or book a trip to France."
– Publishers Weekly

Clotilde Dusoulier is the thirtysomething Parisienne behind the award-winning food blog Chocolate & Zucchini, in which she shares her passion for all things edible. Her focus is on fresh, colorful, and seasonal foods, making room for both wholesome, nourishing dishes and sweet treats. An enthusiastic explorer of flavors and acute observer of culinary trends, she contributes to food and travel magazines around the world, and has authored cookbooks and a guidebook. She lives in Paris, in the Montmartre neighborhood, with her boyfriend and their young son.

Mélina Josserand is a mother of four, a full-time lawyer, and a watercolor artist. Born and raised in France in the back of an antiques gallery, she now lives and works in London.
Loading...
or support indie stores by buying on
(This book is on backorder)