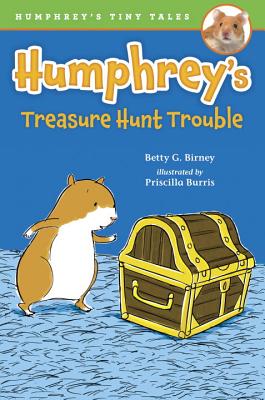 Humphrey might be the only one who can solve the mystery of the missing treasure hunt prize!

Garth has a surprise for his friends when they get to his party—a treasure hunt! Riddles are hidden all around his backyard and he put the prize in the best hiding spot of all—Humphrey’s cage. Only Humphrey knows something Garth doesn’t: someone stole the prize!

Humphrey doesn’t know who took it, but he is good at solving mysteries. Can he put the clues together and save the treasure hunt?

Betty G. Birney has written episodes for numerous children’s television shows, including The New Adventures of Madeleine, Doug, and Bobby’s World, as well as after-school specials and a television movie, Mary Christmas. She has won many awards for her television work, including an Emmy, three Humanitas Prizes, and a Writers Guild of America award.
In addition to the Humphrey books, she is the author of The Seven Wonders of Sassafras Springs and The Princess and the Peabodys. A native of St. Louis, Missouri, Betty lives in Los Angeles with her husband, an actor.

Priscilla Burris graduated from The Fashion Institute of Design & Merchandising, studying Illustration, Design and Merchandising. Since then, she's illustrated several children's books.
Loading...
or
Not Currently Available for Direct Purchase