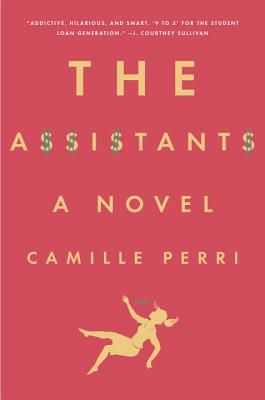 “Ocean’s Eleven meets The Devil Wears Prada” (The Skimm) in this hilarious, razor-sharp debut novel about a group of overeducated and underpaid women who decide they’ve finally had enough...

Rule #1: All important men have assistants. Rule #2: Men rule the world. Still. Rule #3: There is enough money. There is so much money.

Tina Fontana is a thirty-year-old executive assistant to Robert Barlow, the CEO of Titan Corp., a multinational media conglomerate. She’s excellent at her job and beloved by her famous boss—but after six years of making reservations and pouring drinks from bottles that cost more than her rent, the glamour of working for a media company in New York has completely faded, but her student loan debt has not.

When a technical error with Robert’s expense report presents Tina with the opportunity to pay off the entire balance of her loans with what would essentially be pocket change for her boss, she hesitates. She’s always played by the rules, but this would be a life-changer. As Tina begins to fall down the rabbit hole of her morally questionable plan, other assistants with crushing debt and fewer scruples approach her to say that they want in. Before she knows it, she’s at the forefront of a movement that has implications far beyond what anyone anticipated...

Praise For The Assistants…

Praise for The Assistants

“Anyone who’s ever struggled to pay down a student loan and make the rent on that rat-infested apartment will savor this wry, keenly observed debut.”—People

“Five pages into reading The Assistants, you know Perri has a hit on her hands...Nine to Five meets Thelma and Louise—except nobody dies at the end, rape is student debt and nearly every woman we meet is a survivor.”—The New York Times Book Review

“Reminders of the 1990s movie Office Space are present, with a millennial, feminist reboot...a fun, modern twist on a Robin Hood story.”—Library Journal

“Perri’s debut is reminiscent of the golden era of early-aughts chick-lit...The characters’ millennial concerns—overwhelming student-loan debt, underemployment, loneliness in a world of hyperconnectivity—ring true, making this a winner for readers who long for the return of light, clever novels with young, professional women at their center.”—Booklist (starred review)

“Attention readers fed up with their jobs: call in sick tomorrow and dive into this[crackling] debut...Perri's writing is quippy and the pace breezy...enjoy the sweetness of plotting revenge over cocktails (expensed, of course). You'll feel better after reading, promise.”—Kirkus Reviews

“If the characters of HBO’s Girls were capable of larceny and blackmail, they could be the main characters of Perri’s sharp first novel...Perri has a gift for the glib one-liner, and reserved Tina and glamorous Emily make for a great pairing, resulting in a smart and fresh novel.”—Publishers Weekly

“Anyone who has ever been an assistant will appreciate Camille Perri’s funny, honest, 100% relatable (and did I say funny?) debut novel about a band of exploited, entry-level strivers who even the score with their billionaire boss in the most ingenious way. After a long day at work, this is the book you’ll want to pick up—and, after reading it, you’ll never look at an expense report (or your colleagues) in the same way again.”—Elisabeth Egan, author of A Window Opens

“With an incredible sense of humor and an eye for detail, Perri perfectly captures what it's like to assist a high-powered boss. The Assistants is addictive, hilarious, and smart. It's 9 to 5 for the student loan generation.”—J. Courtney Sullivan, New York Times bestselling author of The Engagements and Maine

"Camille Perri’s The Assistants is a hilarious romp through the world of corporate greed and the people who assist them. It’s also a great story of criminal redemption. It was a blast from start to finish.”—Lisa Lutz, author of How to Start a Fire and The Spellman Files

“The Assistants is wry, thoughtful, and funny as hell. I read through the night with a huge smile on my face as lovable Tina Fontana and her raucous band of disenfranchised assistants wreak some Robin Hood-style havoc on their corporate overlords. I had no idea income inequality and grand larceny could be this much fun! I'm so glad Camille Perri did.”—Eliza Kennedy, author of I Take You

“This delicious page-turner is a rallying cry for everyone squandering their 20s in thankless servitude to those who will never share the wealth—unless someone cleverly forces their hand.”—Nicola Kraus, co-author of The Nanny Diaries and How To Be A Grown-Up

“Full of not-so-harmless fun and intriguing characters, The Assistants is a rallying cry for the leagues of overeducated and underpaid women who wonder, perhaps daily, why they’re still assistants.”—Domino.com

“This isn’t exactly the stuff fluffy romances are made of—it owes more to Robin Hood, or maybe Bonnie and Clyde, if Bonnie left Clyde in the car and distributed her spoils among her friends...The Assistants is an economic fable, a story of class warfare dressed up as chick lit...Powerful people of the world, take notice: The assistants will have their revenge.”—BookPage

“[A] raucous debut novel...It's great fun, and Perri freewheels enough millennial savvy, parenthetical asides and clever repartee to give Girls a run for its money...Just sit back and let a smart, funny writer entertain.”—Shelf Awareness

“Assistant Tina Fontana and her cubicle coconspirators hatch a scheme to hijack their boss's expense account to pay off their student-loan debts...but soon their plot takes on a life of its own.”—Cosmopolitan

“Fact informs fiction in The Assistants, a fantasy-fulfillment novel for all the underpaid workers who make important people's worlds go round, by former Esquire assistant Camille Perri.”—Elle

“An insanely fun ride that is as hilarious as it is smart.”—Popsugar

“So well-written, so clever, so smart, and just so much fun...[the plot is] so delicious, and there's something really modern about [it].”—Reading With Robin

“A pretty unflinching but also damn fun (Funflinching? No.) look at wealth and power in the twenty-first century.”—BookRiot

"With a sharp and funny voice, Camille Perri has written a Robin Hood tale for the assistant set and drilled deep into one particular stream of income inequality that resonates with, I'd wager, just about everybody who graduated from college in the last ten-fifteen years."—Raging Biblioholism

“Romantic comedy might be on life support at the movies, but the genre is alive and well in Camille Perri’s debut novel...Although The Assistants is basically a terrific piece of entertainment, the book explores a real national crisis situation.”—The Connecticut Post

“With this debut novel, Perri gives the world the call to arms for an entire generation strapped down by debt, to the underpaid and under-appreciated. Hilarious and stylish, this sly and subversive debut should be read by those about to go into the real world, and those of us stuck in the mire of it already.”—Vol.1 Brooklyn

“The Assistants is as witty as it is fun, and is the perfect almost-summer read.”—Signature Reads

“If you've ever been an assistant, this book will give you a thrilling wave of vindication. With unexpected friendship, a romantic twist, and a unique perspective on the financial divide, this novel is a supremely fun romp through the corporate world.”—Bustle

“Charming and clever, Perri's debut novel is the perfect escape from your own work woes."—Bestbookgrams

“The Assistants isn’t only about a corporate embezzlement job that quickly gets out of hand, it’s also a story about some people taking privilege for granted while others face the skyrocketing price of a college education. Although Tina’s actions aren’t justified, the book does provide a way to open a dialogue about women who are overeducated, underpaid and still in the role of an assistant.”—Associated Press

“A frothy debut.”—O, The Oprah Magazine

“This delightfully wry debut from former Esquire and Cosmo books editor Camille Perri is equal parts satire and modern-day Robin Hood tale. And if you’ve ever worked too hard for too little while the people above you are rolling in bank...well this is a book you’re going to adore.”—Refinery 29

“The Assistants is outstanding.  It’s often hilarious, always engaging, a page-turner and more fun than any job...a great read for anyone who likes a funny, smart, enjoyably tense novel.”—Narrative Species

“This is a fast, fun read, sure to appeal to any woman who feels stuck in a job that doesn’t utilize her education, skills and ambition.”—Book Bitch

“This is the book you’ll see peeking out of every beach bag. In the vein of The Devil Wears Prada, it’s populated with overworked, underpaid assistants in the New York media world.”—The Tennessean

“[A] smart and snappy satire, which blends a timely theme with strong character work. If you loved The Devil Wears Prada or last year’s Dietland, don’t miss this one”—Bookpage

“The Assistants is fun, fast-paced, and full of heart.”—Vulture

“Fun. Easy. Great beach read, or an ‘I’m too tired to think’ read, or a ‘how am I ever going to pay off these student loans’ imaginative fun.”—Chicago Tribune’s ChicagoNow

The Assistants is the story of an underdog...It highlights the shades of gray that can be encountered in life and proposes that the concepts of “good” and “bad” are not necessarily written in stone.”—The Oklahoman

“Camille Perri has written a novel of sweet revenge that goes out to every woman who's worked for incompetent men for too little and too long.”—Thrillist

“This quick-paced look at excess, wealth, morality and revenge is very much a true New York story.”—AM New York

*POPSUGAR’S Best 2016 Books for Women
*One of Roxane Gay’s 2016 “Fun Books That Were Fun”
*Vulture's 20 Fun Novels to Read at the Beach
*Refinery29's Best Books of 2016 So Far
*Glamour's Best Reads of Summer 2016
*Vogue.com's 24 Summer Reads to Pack for your Next Beach Trip
*One of Huffington Post's 21 Recommendations For Anyone Who Wants To Read Books And Chill
*Money.com's 7 Money Books You’ll Actually Want to Read This Summer
*The Knot's Hot New Summer Books for 2016
*Hello Giggles' #1 Beach Read for 2016
*Cosmo.com's 15 Perfect Beach Reads for 2016

Camille Perri is the author of The Assistants. She has worked as a books editor for Cosmopolitan and Esquire. She has also been a ghostwriter of young-adult novels and a reference librarian. She holds a bachelor of arts degree from New York University and a master of library science degree from Queens College. Perri wrote the first draft of The Assistants while working as the assistant to the editor-in-chief of Esquire.