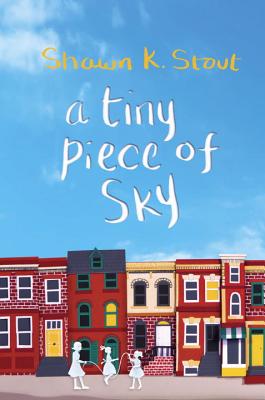 A Tiny Piece of Sky

THE SUMMER STORY OF THREE SISTERS, ONE RESTAURANT, AND A (POSSIBLE) GERMAN SPY

World War II is coming in Europe. At least that's what Frankie Baum heard on the radio. But from her small town in Maryland, in the wilting summer heat of 1939, the war is a world away.
Besides, there are too many other things to think about: first that Frankie's father up and bought a restaurant without telling anyone and now she has to help in the kitchen, peeling potatoes and washing dishes, when she d rather be racing to Wexler's Five and Dime on her skates. Plus her favorite sister, Joanie Baloney, is away for the summer and hasn t been answering any of Frankie's letters.
But when some people in town start accusing her father of being a German spy, suddenly the war arrives at Frankie's feet and she can think of nothing else.
Could the rumors be true? Frankie must do some spying of her own to try to figure out her father's secrets and clear his good name. What she discovers about him surprises everyone but is nothing compared to what she discovers about the world.
In a heartfelt, charming, and insightful novel that is based on true events, Shawn K. Stout weaves a story about family secrets, intolerance, and coming of age that will keep readers guessing until the end.
Praise forA Tiny Piece of Sky
Through warm, funny characters, Shawn Stout builds a riveting bridge from the past that sheds light on today. Wholly memorable. Rita Williams-Garcia, Coretta Scott King Author Award winner for P.S. Be Eleven
Shawn Stout's Frankie Baum is that rare creation: a character so real, so true, we don't just feel we know her we are her. Irrepressible Frankie meets issues like prejudice and loyalty head on, in a story both highly entertaining and deeply thought-provoking. She may be #3 in her family, but she'll be #1 in the hearts of all who read this book. Tricia Springstubb, author ofWhat Happened on Fox Street
At turns hilarious, at turns heartbreaking, Shawn Stout's story shows us the damage that a whisper campaign can do to a family and a community, and at the same time shows us, each of us, a way to find our hearts. Frankie Baum is a hero from a distant time and yet a hero for all times, the kind of hero who never gets old. I loved this book from the very beginning to the very end. Kathi Appelt, author of the National Book Award finalist & Newbery Honor book The Underneath

"Stout uses an archly chummy direct address at several points, successfully and humorously breaking up tension in this cleareyed look at bad behavior by society....Successfully warmhearted and child-centered." Kirkus Reviews

"Through Frankie's thoughtful insights, Stout addresses injustices such as racism and xenophobia without turning didactic...the conclusion is a realistic mix of bittersweet and heartwarming." Publishers Weekly

"Fans of Augusta Scattergood's Glory Be as well as those of Jeanne Birdsall's Penderwicks series will enjoy this slice of history. A solid piece of historical fiction to add to middle grade collections." School Library Journal
"Tackling race, social justice, and even death, this well-paced novel will find the right audience among readers wanting fairness with their historical fiction." BCCB
"Young teens will enjoy Frankie's spirit and humor while learning a little bit about people and prejudice along the way." VOYA
"In this coming-of-age story, Frankie sees people for who they really are, despite skin color or nationality. Readers who enjoy historical fiction will gravitate to this story." School Library Connection

Shawn K. Stout (www.shawnkstout.com)grew up in Hagerstown, Maryland, the same town where A Tiny Piece of Sky takes place, but she did her growing up more than forty years after the events in this story occur. She is the author of the Not-So-Ordinary Girl series and the Penelope Crumb series and has an MFA in Writing for Children and Young Adults from Vermont College of Fine Arts. Shawn K. Stout lives with her family in Maryland. You can follow her on Twitter at @shawnkstout."
Loading...
or
Not Currently Available for Direct Purchase