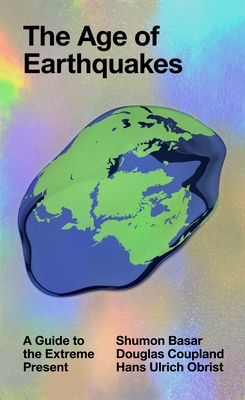 The Age of Earthquakes

A Guide to the Extreme Present

A highly provocative, mindbending, beautifully designed, and visionary look at the landscape of our rapidly evolving digital era.

50 years after Marshall McLuhan's ground breaking book on the influence of technology on culture in The Medium is the Massage, Basar, Coupland and Obrist extend the analysis to today, touring the world that’s redefined by the Internet, decoding and explaining what they call the 'extreme present'.

THE AGE OF EARTHQUAKES is a quick-fire paperback, harnessing the images, language and perceptions of our unfurling digital lives. The authors offer five characteristics of the Extreme Present (see below); invent a glossary of new words to describe how we are truly feeling today; and ‘mindsource’ images and illustrations from over 30 contemporary artists. Wayne Daly’s striking graphic design  imports  the  surreal,  juxtaposed,  mashed  mannerisms  of screen to page. It’s like a culturally prescient, all-knowing email to the reader: possibly the best email they will ever read.

Welcome to THE AGE OF EARTHQUAKES, a paper portrait of Now, where the Internet hasn’t just changed the structure of our brains these past few years, it’s also changing the structure of the planet. This is a new history of the world that fits perfectly in your back pocket.


Praise For The Age of Earthquakes: A Guide to the Extreme Present…

"It is a book not only inspired by the internet, but seemingly written by the internet. It is as if the internet gained not only artificial self-consciousness but wisdom – and then became your pal.” --Tod Wodicka, The National

“Coupland is up to his new-old tricks, and this time he's brought some friends. It's hard to tell where one ends and the other begins. That's a good thing...The Age of Earthquakes is like the internet in book form. A Tumblr made of paper. Lots of interesting tidbits, philosophical musings presented as fact.” --LitReactor

"The Age of Earthquakes is a kind of philosophical Anarchist Cookbook for the online era, when we are in touch with everyone at once all the time, or at least like to feel that we are…It’s a book insistently engaged with the present tense. It is both a wave and a particle; content and form. Perhaps it is the 21st century’s first book-meme.” --Pacific Standard

Since 1991, Douglas Coupland has written thirteen novels published in most languages. He has written and performed for England's Royal Shakespeare Company and is a regular columnist with The Financial Times. He began a visual art practice in 2000, and his first museum retrospective opens in summer 2014 at the Vancouver Art Gallery and travels to Munich's Villa Stuck for the summer of 2015.

Shumon Basar is a writer. He's the author of Do You Often Confuse Love with Success and with Fame? and some of his (co)edited books include Translated By, Cities from Zero and Hans Ulrich Obrist Interviews: Volume 2. He's Editor-at-Large at Tank magazine, Contributing Editor at Bidoun magazine, director of Format at the AA School, London, an advisor to the Fondazione Prada, Milan and Commissioner of the Global Art Forum in Dubai, the city where his novel World!World!World! is set.

Hans Ulrich Obrist is a curator and writer. Since 2006 he has been co-director of the Serpentine Gallery, London. His previous books include Ai Wei Wei Speaks, written with Ai Wei Wei, and Ways of Curating, published by Allen Lane. He is widely considered one of the most influential contemporary curators in the world.