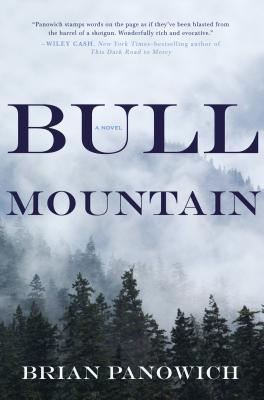 “Set in the mountainous region of northern Georgia and reminiscent of Winter's Bone by Daniel Woodrell, this debut is a potent tale about land and lineage, love and loyalty, livelihood and the law, and life itself. Panowich's words are fresh and clean, hard and dirty; he knows what he is writing about. The book's first chapter - a short story in its own right - is worth the price of admission to Bull Mountain. Climb on up and enjoy the view. Just watch your step!”
— JK Garrett Thomas (W), Union Avenue Books, Knoxville, TN
View the List

Panowich] pulls off a] daunting undertaking with astounding success . . . The storytelling is mesmerizing, with virtually every chapter set in a different timeline and focused on a single character, but the sense of immediacy carries over into each era. And while the violence is shocking in its coldhearted brutality, it's as aesthetically choreographed as any ballet. Marilyn Stasio, The New York Times Book Review
Brian Panowich stamps words on the page as if they ve been blasted from the barrel of a shotgun, and as with a shotgun blast, no one is safe from the scattered fragments of history that impale the people of Bull Mountain. Wiley Cash, New York Times-bestselling author of This Dark Road to Mercy
From a remarkable new voice in Southern fiction, a multigenerational saga of crime, family, and vengeance.

Clayton Burroughs comes from a long line of outlaws. For generations, the Burroughs clan has made its home on Bull Mountain in North Georgia, running shine, pot, and meth over six state lines, virtually untouched by the rule of law. To distance himself from his family's criminal empire, Clayton took the job of sheriff in a neighboring community to keep what peace he can. But when a federal agent with the Bureau of Alcohol, Tobacco, and Firearms shows up at Clayton's office with a plan to shut down the mountain, his hidden agenda will pit brother against brother, test loyalties, and could lead Clayton down a path to self-destruction.
In a sweeping narrative spanning decades and told from alternating points of view, the novel brilliantly evokes the atmosphere of the mountain and its inhabitants: forbidding, loyal, gritty, and ruthless. A story of family the lengths men will go to protect it, honor it, or in some cases destroy it Bull Mountain is an incredibly assured debut that heralds a major new talent in fiction.

Brian Panowich was a touring musician for twelve years before settling in East Georgia with his family. He now works full-time as a firefighter. Bull Mountain is his first novel."
Loading...
or
Not Currently Available for Direct Purchase