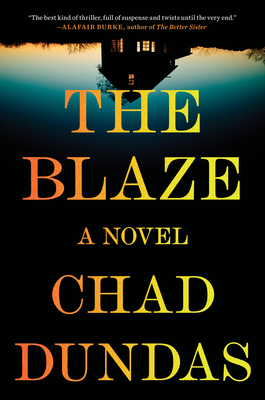 Praise For The Blaze…

“[The Blaze] is both a cleverly plotted mystery and a touching account of a wounded veteran trying to rebuild his life…With these two beautifully realized protagonists driving the action, Dundas delivers a fast-paced plot filled with unexpected twists. Their small town is vividly portrayed, and the writing is superb throughout, occasionally verging on poetry.”—Associated Press

“A wounded veteran and a strong newspaperwoman combine with a well-constructed plot to spin a plausible and engaging tale…This one wins far more on characters and danger than on bloodshed. Keep books like this coming, Chad Dundas.”—Kirkus Reviews (starred)

“Another brilliantly woven story about second chances from Montana native Dundas…Recommend this to readers looking for an inviting narrative with a very ‘now’ feel.”—Booklist (starred)

“Dundas knows how to keep things simmering, and his cracking good mystery kept this reviewer up at night. It just might keep you up at night, too.”—BookPage (starred)

“It delivers the goods.”—Washington Independent Review of Books

“There’s more than enough here to like that readers will enjoy this one and will certainly want to come back for whatever’s next.”—New York Journal of Books

“With firm, incisive writing, Dundas makes his Montana setting come alive. The Blaze is the best kind of thriller, full of suspense and twists until the very end, with complicated characters haunted by the past and struggling with the present."—Alafair Burke, New York Times bestselling author of The Better Sister

“Propulsive, heartfelt, The Blaze smolders with tension as Matt struggles to gather troubling shreds of a childhood event that he can’t quite bring into focus, his quest gaining urgency as more lives are threatened, his own among them. A riveting new take on the impossibility of escaping one’s past.”—Gwen Florio, author of Silent Hearts

"An authentic look at memories, how they affect us, and how their absence leaves holes in our lives that can’t be filled with anything but the truth. A fantastic mystery that had me in its grip from the first page."—Jamie Ford, New York Times bestselling author of Hotel on the Corner of Bitter and Sweet

Chad Dundas earned his MFA from the University of Montana, and his short fiction has appeared in the Beloit Fiction Journal, Sycamore Review, Sou'Wester, and Thuglit. Since 2001, he's worked as a sportswriter for national outlets including ESPN, NBC Sports, Sporting News, Bleacher Report, and the Associated Press, as well as local and regional newspapers. A fourth-generation Montanan, he lives with his wife and children in Missoula.
Loading...
or
Not Currently Available for Direct Purchase