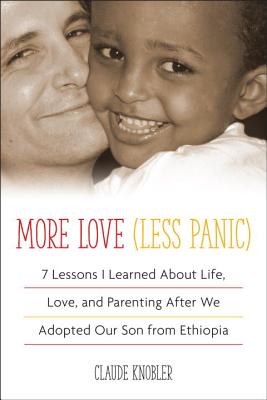 7 Lessons I Learned About Life, Love, and Parenting After We Adopted Our Son from Ethiopia

In this heartwarming and hilarious memoir, Claude Knobler describes how he learned the hard way that the apple actually can fall far from the tree—and that’s Okay.

Already the biological parents of a seven-year-old son and a five-year-old daughter, Claude Knobler and his wife decided to adopt Nati, a five-year-old Ethiopian boy who seemed different from Knobler in every conceivable way. After more than five years spent trying to turn his wild, silly, adopted African son into a quiet, neurotic, Jewish guy like himself, Knobler realized the importance of having the courage to love, accept, and let go of his children.

In this wonderfully written memoir, Knobler explains how his experiences raising Nati led him to learn a lesson that applied equally well to parenting his biological children: It’s essential to spend the time we are given with our children to love them and enjoy them, rather than push and mold them into who we think they should be.

Praise For More Love, Less Panic: 7 Lessons I Learned About Life, Love, and Parenting After We Adopted Our Son from Ethiopia…

"What happens when a dad (a natural comedian, writer, and self-doubting fellow) adopts a little kid (a natural comedian, mischief-maker, and fearless fellow)? Sparks fly and the dad overhauls everything he thought he knew about fatherhood and begins anew. Parenthood becomes a journey of the spirit into uncharted and often ridiculous waters, with numerous defeats, surprising successes, and plenty of love and laughter along the way."
—Melissa Faye Greene, author of There Is No Me Without You and No Biking in the House Without a Helmet

“This is one of the most beautiful stories about making a happy family that I have ever read.”
—Dr. Jane Aronson, CEO of Worldwide Orphans Foundation

“For a raw, honest, as it happens account of an older child cross cultural adoption, I've yet to read better than this… Great read for adoptive families.”
— KJ Dell’Antonia, New York Times Motherlode blog

“Memoir meets self-help in Knobler’s enjoyable account of life as an adoptive father. This wise account has the potential to reach a large parental audience—not just dads, and not just adoptive parents.”
—Publishers Weekly

“This is a breakthrough book on many levels, not the least of which is the world of men who are redefining themselves as whole human beings, capable of nurturing on their own terms.”
—Retailing Insight

Claude Knobler’s essays have appeared in Parenting and on NPR’s “This I Believe,” as well as in one of the radio program’s literary anthologies, This I Believe: On Fatherhood, and in Worldwide Orphans Foundation founder Dr. Jane Aronson’s Carried in Our Hearts: The Gift of Adoption: Inspiring Stories of Families Created Across Continents.
Loading...
or
Not Currently Available for Direct Purchase