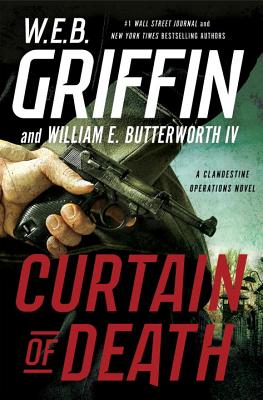 From #1 New York Times-bestselling author W.E.B. Griffin comes a dramatic thriller in the Clandestine Operations series about the Cold War, the fledgling Central Intelligence Agency—and a new breed of warrior.

January, 1946: Two WACs leave an officers' club in Munich, and four Soviet NKGB agents kidnap them at knifepoint in the parking lot and shove them in the back of an ambulance. That is the agents' first mistake, and their last. One of the WACs, a blonde woman improbably named Claudette Colbert, works for the new Directorate of Central Intelligence, and three of the men end up dead and the fourth wounded.

The “incident,” however, will send shock waves rippling up and down the line, and have major repercussions not only for Claudette, but for her boss, James Cronley, Chief DCI-Europe, and for everybody involved in their still-evolving enterprise. For, though the Germans may have been defeated, Cronley and his company are on the front lines of an entirely different kind of war now. The enemy has changed, the rules have changed—and the stakes have never been higher.

Praise For Curtain of Death (A Clandestine Operations Novel #3)…

Praise for Curtain of Death

“Showcases the scary time period just after WWII and the beginnings of the CIA and the Cold War... Compelling.”—Booklist

“Riveting...This latest page-turner has it all: cracking realism and adventure, rich characters, and a special flair for the military heart and mind.”—Mystery Tribune

“Tense, page-turning scenes pitting rival agencies against one another against the veil of secrecy in dealing with former Nazis...The book really shines in its interpretations of the power struggles that accompanied the birth of the CIA and how the United States handled both former Nazis and the rise of the KGB.”—The Historical Novels Review

Praise for the Clandestine Operations Series

“An incredible mix of intrigue and diplomacy from a literary team that ignites suspense lovers everywhere. Readers will be panting for the next novel.”—Suspense Magazine

“A Griffin adventure to bring out the Walter Mitty in every red-white-and-blue-blooded American male.”—Kirkus Reviews

“Engaging...It’s a testament to the authors’ skill and wide experience that the pages seem to turn themselves.”—Publishers Weekly

“An excellent series. The period between WWII and the Cold War offers raw material for several books, and as fans of Griffin’s body of work are well aware, he really sinks his teeth into politics and history.”—Booklist

William E. Butterworth IV has been a writer and editor for major newspapers and magazines for more than twenty-five years, and has worked closely with his father for several years on the editing of the Griffin books. He is the coauthor of several novels in the Badge of Honor, Men at War, Honor Bound, and Presidential Agent series. He lives in St. Petersburg, Florida.
Loading...
or
Not Currently Available for Direct Purchase