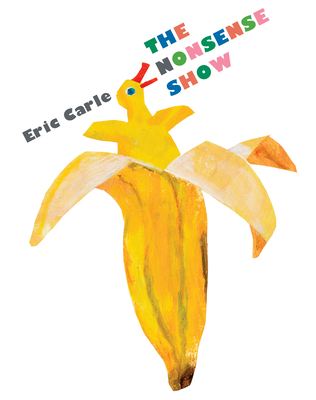 Ducks growing out of bananas? A mouse catching a cat? What’s wrong with this book from the creator of The Very Hungry Caterpillar?

Yes, there’s something strange, something funny and even downright preposterous on every page of this book. But it’s not a mistake – it’s nonsense! And it’s also surrealism. Nonsense lies at the heart of many beloved nursery rhymes. Children readily accept odd statements like “the cow jumped over the moon” and “the dish ran away with the spoon.” This fanciful bending of reality is also basic to surrealism.

In this book, nonsense and surrealism combine to spark creativity and imagination. What’s true? What’s impossible? What’s absolutely absurd? From Eric Carle, creator of the classic, The Very Hungry Caterpillar, comes a book to make children laugh and think, preparing them for a lifetime of loving both words and art.

Following on the heels of The Artist Who Painted a Blue Horse (an homage to the artist Franz Marc and expressionism) and Friends, with its semi-abstract artwork, The Nonsense Show forms a trilogy of sorts, dedicated to introducing young readers to different styles of artwork without ever overlooking the need to, first and foremost, appeal to children and their love of play. One of the true legends and pioneers of picture book making continues to expand and challenge the genre.

Praise for The Nonsense Show

* "Carle creates fun and laughter in this homage to the surrealist artist René Magritte. [P]erfect for storytimes and silly times all round. Carle hits it out of the nonsense park!"–Booklist, starred review

* "A sure hit as a read-aloud and a definite purchase for picture book collections."–School Library Journal, starred review

* "A picture book made to incite pleasure and joy."–Kirkus Reviews, starred review

* "[The Nonsense Show], with its cleanly designed white pages, makes the unexpected elements of the imagery stand out and prompts questions and wonder."–Horn Book, starred review


Praise For The Nonsense Show…

* "Carle creates fun and laughter in this homage to the surrealist artist René Magritte. [P]erfect for storytimes and silly times all round. Carle hits it out of the nonsense park!"–Booklist, starred review

* "A sure hit as a read-aloud and a definite purchase for picture book collections."–School Library Journal, starred review

* "A picture book made to incite pleasure and joy."–Kirkus Reviews, starred review

* "[The Nonsense Show], with its cleanly designed white pages, makes the unexpected elements of the imagery stand out and prompts questions and wonder."–Horn Book, starred review

Eric Carle has two grown-up children, a son and a daughter. With his wife Barbara, he lives in Northampton, Massachusetts. The Carles spend their summers in the nearby Berkshire hills.