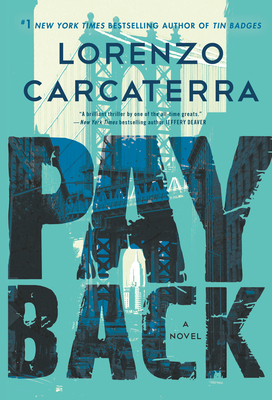 Payback is personal for a former NYPD detective taking on a corrupt cop and a dirty accounting firm in this adrenaline-laced thriller from the #1 New York Times bestselling author of Sleepers and Tin Badges.

If there’s one kind of person Tank Rizzo hates most in this world, it’s a dirty cop. Criminals are at least honest about being dishonest; dirty cops are a disgrace to the badge they carry. Detective Eddie Kenwood is one such disgrace. He’s got the highest signed-confession rate in the NYPD and a distinguished career built on putting men behind bars—whether they’re guilty or not doesn’t matter much to him. When Tank’s partner, Pearl, tells him about an old family friend Kenwood put in jail for a murder he didn’t commit, Tank and Pearl vow to take Kenwood down.

Also in need of a takedown: the money-laundering accounting firm where Tank’s brother used to work—before he mysteriously died, leaving Tank the sole guardian of his nephew, Chris. Chris smells a rat, and enlists Tank’s help to bring the men who had his father killed to justice.

Working two big cases means getting out the big guns, and Tank assembles his A-team. With help from a retired mobster, a professional boxer, a Chelsea psychic, a dog named Gus, and the U.S. Attorney—not to mention his and Pearl’s own quick wits and Chris’s burgeoning skills as a computer whiz—Tank gears up to take on his most dangerous and personal cases to date.

“Set aside a day for this book, because you’re not going to be doing anything but reading—or should I say, speeding—from first page to last, in the company of some of the most memorable characters we’ve ever met in crime fiction. By turns wry, moving, and gut-punching, Payback is a novel you won’t forget. And as always, Carcaterra’s keen eye and deft style bring New York City to stunning life. A brilliant thriller by one of the all-time greats.”—Jeffery Deaver, #1 internationally bestselling author

“A gritty, old-school crime novel that flat-out delivers the goods. Payback is an engrossing, emotionally satisfying read with good guys you pull for and bad guys you want to plug yourself. No one knows the streets of Manhattan like Lorenzo Carcaterra, and it shows from page one. A stone cold winner!”—Christopher Reich, New York Times bestselling author of The Take and Crown Jewel

“With retired NYPD detective Tank Rizzo at the helm, and the most colorful cast of backup crime fighters you have never seen before, Payback is the kind of brilliantly conceived, high-powered, totally diverting entertainment everyone is looking for these days. On a case that is as down and dirty as it is personal, this is Lorenzo Carcaterra at his best, and that’s saying something!”—Jonathan Santlofer, bestselling author of The Death Artist

“Rambunctious . . . Cases intertwine in an action-filled plot spiced with gangster lore and New York history. Those who like their cop novels to take retribution to wild and wicked extremes will have fun.”—Publishers Weekly

Lorenzo Carcaterra is the #1 New York Times bestselling author of A Safe Place, Sleepers, Apaches, Gangster, Street Boys, Paradise City, Chasers, Midnight Angels, The Wolf, and Tin Badges. He is a former writer/producer for Law & Order and has written for National Geographic Traveler, The New York Times Magazine, and Maxim. He lives in New York City and is at work on his next novel.
Loading...
or support indie stores by buying on