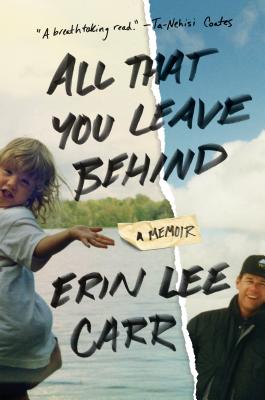 All That You Leave Behind

“A documentary filmmaker and daughter of the late, great New York Times columnist David Carr celebrates and wrestles with her father’s legacy in a raw, redemptive memoir.”—O: The Oprah Magazine

“A breathtaking read . . . a testimony equal parts love and candor. David would have had it no other way.”—Ta-Nehisi Coates, bestselling author of Between the World and Me

Dad: What will set you apart is not talent but will and a certain kind of humility. A willingness to let the world show you things that you play back as you grow as an artist. Talent is cheap.
Me: OK I will ponder these things. I am a Carr.
Dad: That should matter quite a bit, actually not the name but the guts of what that name means.

A celebrated journalist, bestselling author (The Night of the Gun), and recovering addict, David Carr was in the prime of his career when he suffered a fatal collapse in the newsroom of The New York Times in 2015. Shattered by his death, his daughter Erin Lee Carr, at age twenty-seven an up-and-coming documentary filmmaker, began combing through the entirety of their shared correspondence—1,936 items in total—in search of comfort and support.

What started as an exercise in grief quickly grew into an active investigation: Did her father’s writings contain the answers to the question of how to move forward in life and work without her biggest champion by her side? How could she fill the space left behind by a man who had come to embody journalistic integrity, rigor, and hard reporting, whose mentorship meant everything not just to her but to the many who served alongside him?

All That You Leave Behind is a poignant coming-of-age story that offers a raw and honest glimpse into the multilayered relationship between a daughter and a father. Through this lens, Erin comes to understand her own workplace missteps, existential crises, and relationship fails. While daughter and father bond over their mutual addictions and challenges with sobriety, it is their powerful sense of work and family that comes to ultimately define them.

This unique combination of Erin Lee Carr’s earnest prose and her father’s meaningful words offers a compelling read that shows us what it means to be vulnerable and lost, supported and found. It is a window into love, with all of its fierceness and frustrations.

“Thank you, Erin, for this beautiful book.  Now I am going to steal all of your father’s remarkable advice and tell my kids I thought of it.”—Judd Apatow

Praise For All That You Leave Behind: A Memoir…

“A documentary filmmaker and daughter of the late, great New York Times columnist David Carr celebrates and wrestles with her father’s legacy in a raw, redemptive memoir.”—O: The Oprah Magazine (The Best Nonfiction Books Coming Out in 2019)

“David Carr was the rarest of friends—the kind who completely altered the trajectory of my life. I’ve known his daughter Erin for over twenty years, and cannot think of a more apt narrator to explain to the world what David meant to all of us, but, more importantly, to the children he so dearly loved. All That You Leave Behind is a breathtaking read for a breathtaking man. It is neither a tribute nor a monument to David’s life, but a testimony equal parts love and candor. David would have had it no other way.”—Ta-Nehisi Coates, bestselling author of Between the World and Me

“[This] memoir is magnificent.”—Brian Stelter, CNN

“There’s inspiration in the reminiscence, in the form of encouraging emails and pep talks from father to daughter, and even a list of lessons learned at the end of the book, starting with “Listen when you enter a room” and “Don’t buy into your myth.” But as her father did in his own memoir, The Night of the Gun, Carr doesn’t shy away from darker truths.”—The New York Times

“By page one, we were drawn in. By page three, we were weeping. Erin Lee Carr is a documentarian by trade, but this memoir proves she’s also an incredible writer. Clearly, she takes after her father, legendary journalist David Carr, whose sudden death in 2015 is the basis for this memoir. Carr combs through her 1,936 emails with her father to create a story of their relationship.”—Refinery29

“David Carr was a celebrated New York Times journalist and author who suddenly passed away in 2015. And in this gorgeous memoir, his daughter Erin Lee Carr  beautifully chronicles their close bond and shared battle with alcoholism. It’s rare for a memoir about grief to be a page-turner, but Erin’s writing is so compelling and her relationship with David so moving that I couldn’t put it down.”—Cosmopolitan

“All That You Leave Behind, an unsparingly honest portrait of [Erin and David Carr’s] intensely close father-daughter relationship . . . also stands entirely on its own, on Erin’s merits as a frank, intimate storyteller; it is proof that, in the wake of her father’s death, she has continued to find her voice.”—Vogue

“In her raw and earnest memoir, All That You Leave Behind, Erin brings us into her struggle to come to grips with who her father was and how to harness the weight and promise of his enduring legacy to shape who she’s becoming. . . . It’s filled with love, hope and ambition—just as David was, just as his daughter is.”—Minneapolis Star Tribune

“This tough and touching book would surely make its author’s father beam with pride.”—The Columbus Dispatch

“Erin Lee Carr’s father, David, was an inimitable force in American journalism and a complex, boundlessly fascinating figure in her life. But what we learn in All That You Leave Behind is that Erin is just as much of an original as the man who raised her, and her sharp but tender-hearted debut memoir is perfect evidence of that. This book is wonderful.”—Lena Dunham

Erin Lee Carr is a director, producer, and writer based in New York City. Named one of the “30 Under 30” most influential people in media by Forbes, Carr most recently directed At the Heart of Gold, about the USA Gymnastics scandal, and I Love You: Now Die, about the Michelle Carter murder-by-texting trial, both for HBO. She also directed “Drug Short,” an episode of Netflix’s critically acclaimed series Dirty Money. She lives in New York City, where she enjoys petting dogs on the street.