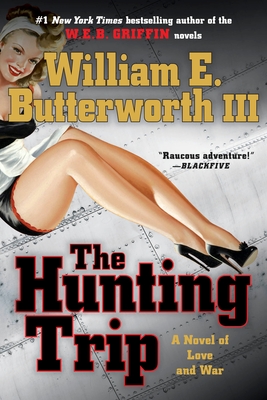 A Novel of Love and War

From the #1 New York Times–bestselling author of the W. E. B. Griffin novels comes a rollicking story of love, war, and adventure.

As the author of the electrifying W. E. B. Griffin novels of the military, police, and spies and counterspies, William E. Butterworth III has been delighting readers for decades—but he has a special treat for them now.
At the tender age of sixteen, Philip W. Williams III is expelled from boarding school for committing a prank, and on the train home wonders where his life will take him now. It never enters his mind that he will become a special agent of the U.S. Army Counterintelligence Corps in postwar Germany, play a key role in the defection of a Soviet officer and then work for the CIA, marry a ferocious Austrian ballet dancer, become a renowned bestselling novelist, and meet the love of his life on a hunting trip. Yet all of this, and much more, awaits him, in a raucous series of adventures that will have readers laughing, cheering, and propulsively turning the pages to discover what happens next.


Praise For The Hunting Trip: A Novel of Love and War…

PRAISE FOR THE HUNTING TRIP

“Writing as W. E. B. Griffin, Bill Butterworth has given us an unrivaled array of novels about men at war, both on famed battlefields and in the shadows. This time out, his target was pure—no, make that blushingly impure—enjoyment. The result? A ripping, rollicking, very tall tale of Cold War derring-do that’s more fun than a long weekend in Vegas with your worst enemy’s credit card.” —Ralph Peters, author of Cain at Gettysburg and Lines of Fire

“A fascinating, informative, and very funny novel by that American writing phenomenon known as William E. Butterworth III. This one will keep you wondering, is it fact or fiction?” —Fannie Flagg, bestselling author of Fried Green Tomatoes at the Whistle Stop Cafe

“Quite entertaining. It might come as a surprise to many W. E. B. Griffin fans that Butterworth's literary output is actually quite varied: under different names, he’s written mysteries, YA fiction, romance, and nonfiction. This thinly veiled roman à clef extends his range still further and will attract fans of military-based fiction.” —Booklist

William E. Butterworth III is the author of more than 150 books, most notably the W. E. B. Griffin novels—more than fifty New York Times bestsellers in the Brotherhood of War, Corps, Honor Bound, Men at War, Badge of Honor, Presidential Agent, and Clandestine Operations series. He lives in Alabama and Argentina.
He is a member of the Special Operations Association, the Veterans of Foreign Wars, the American Legion, the Army Aviation Association, the Armor Association, and the Office of Strategic Services (OSS) Society, and has honorary memberships in many other military and intelligence associations. He has been vested into the Order of St. George of the U.S. Armor Association, and the Order of St. Andrew of the U.S. Army Aviation Association, and been awarded honorary degrees by Norwich University (the nation’s first and oldest private military college) and Troy State University. He was the graduation dinner speaker for the class of 1988 at the U.S. Military Academy at West Point.