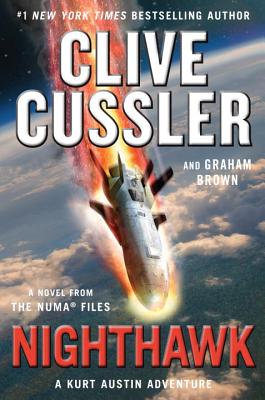 NUMA crew leaders Kurt Austin and Joe Zavala must beat the clock to stop the world’s most dazzling new technological advance from becoming mankind’s last in this action-packed thriller from the #1 New York Times–bestselling grand master of adventure.

When the most advanced aircraft ever designed vanishes over the South Pacific, Kurt Austin and Joe Zavala are drawn into a deadly contest to locate the fallen machine. Russia and China covet the radical technology, but the United States worries about a darker problem. They know what others don’t—that the X-37 is carrying a dangerous secret, a payload of exotic matter, extracted from the upper reaches of the atmosphere and stored at a temperature near absolute zero. As long as it remains frozen, the cargo is inert, but if it thaws, it will unleash a catastrophe of nearly unthinkable proportions.

From the Galapagos Islands to the jungles of South America to an icy mountain lake many believe to be the birthplace of the Inca, the entire NUMA team will risk everything in an effort to avert disaster...but they may be caught in a race that no one can win.

Praise For Nighthawk (The NUMA Files #14)…

Praise for the NUMA Files Novels

“Cussler’s latest is the most breathtakingly suspenseful, wildly inventive, enjoyable thriller in the NUMA Files series to date! Hard-core fans will snap it up.”—Library Journal

“Electrifying...Cussler delivers all the usual twists and turns on the way to the explosive climax.”—Publishers Weekly

“Ghost Ship is the closest yet to a flat-out James Bond adventure. The best Cussler stories are the ones that are the most personal to the hero, and for Kurt Austin, a failed rescue attempt still causes nightmares. Another solid entry in the NUMA Files series.”—Associated Press

Clive Cussler is the author or coauthor of over fifty previous books in five bestselling series, including Dirk Pitt®, NUMA® Files, Oregon® Files, Isaac Bell, and Sam and Remi Fargo. His nonfiction works include Built for Adventure: The Classic Automobiles of Clive Cussler and Dirk Pitt, plus The Sea Hunters and The Sea Hunters II; these describe the true adventures of the real NUMA, which, led by Cussler, searches for lost ships of historic significance. With his crew of volunteers, Cussler has discovered more than sixty ships, including the long-lost Confederate ship Hunley. He lives in Colorado and Arizona.

Graham Brown is the author of Black Rain and Black Sun, and the coauthor with Cussler of Devil’s Gate, The Storm, Zero Hour, Ghost Ship, and The Pharaoh’s Secret. A pilot and an attorney, he lives in Arizona.
Loading...
or
Not Currently Available for Direct Purchase