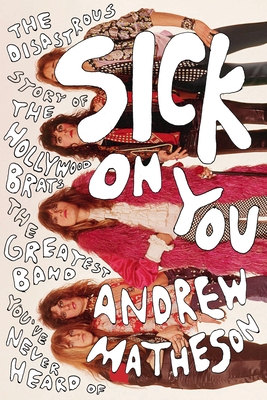 Sick On You (Paperback)

The Disastrous Story of The Hollywood Brats, the Greatest Band You've Never Heard Of

With only a guitar, a tatty copy of the Melody Maker, and his template for the perfect band, Andrew Matheson set out, in 1971, to make music history. His band, the Hollywood Brats, were pre-punk prophets—uncompromising, ultrathin, wild, and untamable. Thrown into the crazy world of the 1970s London music scene, the Brats recorded one genius-but-ignored album and ultimately fell foul of the crooks who ran a music industry that just wasn't quite ready for the punk revolution. Directly inspiring Malcolm McLaren, the Sex Pistols, and the Clash, the Hollywood Brats imploded too soon to share in the glory. Sick On You is a startling, funny, and incredibly entertaining period memoir about never quite achieving success despite flying so close to greatness.

Andrew Matheson was a founding member of the Hollywood Brats, the band that never really was, but that did what it could from 1971 to 1975. He has since been writing and recording music, producing, publishing magazine articles, and drinking pints.

Praise For Sick On You: The Disastrous Story of The Hollywood Brats, the Greatest Band You've Never Heard Of…

“An exuberant memoir that doubles as slapstick comedy…. A riotous portrait of a naive rocker with a penchant for foolishness, Sick on You is packed with louche behavior, provocative musicianship, and outrageous social gaffes…. Matheson writes with the jagged verve he once sought from his band…. He has turned his punk rock travails into an enormously likable memoir.”
—Kevin Canfield, The Washington Post

“The Hollywood Brats are a folk legend; they were doing what they were doing before anybody. This is one of the great rock ’n’ roll hard-luck stories, by turns shocking and hilarious.”
—Bob Stanley, author of Yeah! Yeah! Yeah!
or
Buy Here
Copyright © 2020 American Booksellers Association