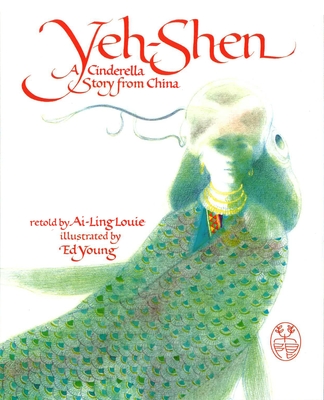 A Cinderella Story from China

Half-starved and overworked by her stepmother, Yeh-Shen’s only friend is a fish with golden eyes. When the stepmother kills the fish for dinner, poor Yeh-Shen is left with only the bones. But the bones are filled with a powerful spirit. When Ye-Shen is forbidden to attend the annual spring Festival, the spirit grants her a gown of azure blue and delicate golden slippers. That night, everyone marvels at the beautiful, mysterious young woman at the ball.

Praise For Yeh-Shen: A Cinderella Story from China…

"Has a misty dreamlike air. A worthwhile addition to picture-book collections." —Booklist

''The artist's work ... has been executed with chromatic splendor—a unique combination of brilliance and restraint." —The Horn Book

"Every library will be enriched by it." —School Library Journal

Born in New York City, AI-LING LOUIE graduated from Sarah Lawrence College and received her graduate degree from Wheelock College. After teaching school near Boston, she returned to the New York area, moving to New Jersey. The tale of Yeh-Shen had been told in her family for three generations when, to her surprise, a research trail led Ms. Louie to the Cinderella of her grandmother's story as recorded in an ancient Chinese manuscript, which is reproduced in this book. Further research confirmed that the story had been told in China since the days of the T'ang dynasty (618-907 A.D.), whereas the earliest known European version is an Italian tale dating from 1634.

ED YOUNG was born in Tientsin, China, grew up in Shanghai, and came to the United States when he was in his late teens. A graduate of the University of Illinois and the Los Angeles Art Center, he has illustrated many beautiful books for young people, among them The Emperor and the Kite, a Coldecott Honor Book (written by Jane Yolen); Chinese Mother Goose Rhymes (translated by Robert Wyndham); The Terrible Mung Gwama: A Chinese Folktale; Bo Rabbit Smart for True: Folktales from the Gullah (by Priscilla Jaquith); and High on a Hill: A Book of Chinese Riddles. The artwork for Yeh-Shen was more than two years in the making, and Mr. Young made two trips to China to do his careful research into the traditional costumes and customs of the people in the area in which this tale is set.
Loading...
or support indie stores by buying on