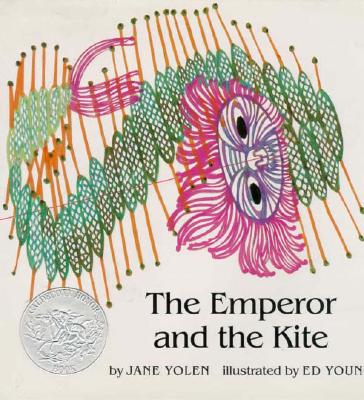 The Emperor and the Kite

Princess Ojeow Seow, youngest and smallest daughter of the Emperor, is not thought of very much by her family--when thought of at all. So she spends her days playing with a kite made from paper and sticks.
When the Emperor is captured and imprisoned in a high tower, though, it is Djeow Seow who patiently weaves a long, strong rope of her own hair, attaches it to the tail of her kite, and cleverly flies up to her father in hopes of rescuing him.
Ed Young's brilliant full-color illustrations, which are based on an intricate traditional Oriental papercut technique, grace this tale by renowned storyteller Jane Yolen. Told in an easy-to-read yet sensitive and poetic style, it evokes the long-ago and far-away flavor of ancient China. At the heart of the story are the timeless qualities of love and loyalty.
This newly designed edition of the classic The Emperor and the Kite joins the beauty of language and art so wondrously that readers of all ages will be enchanted.

Born and raised in New York City, Jane Yolen now lives in Hatfield, Massachusetts. She attended Smith College and received her master's degree in education from the University of Massachusetts. The distinguished author of more than 170 books, Jane Yolen is a person of many talents. When she is not writing, Yolen composes songs, is a professional storyteller on the stage, and is the busy wife of a university professor, the mother of three grown children, and a grandmother.