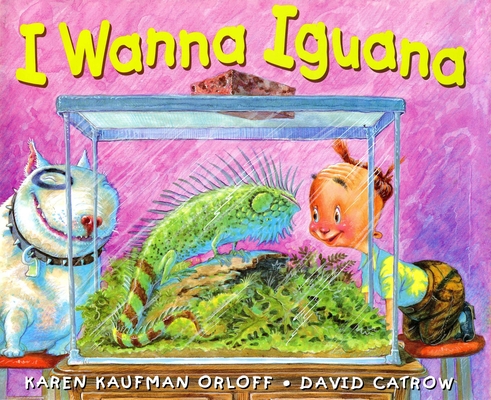 Alex just has to convince his mom to let him have an iguana, so he puts his arguments in writing. He promises that she won't have to feed it or clean its cage or even see it if she doesn't want to. Of course Mom imagines life with a six-foot-long iguana eating them out of house and home. Alex's reassurances: It takes fifteen years for an iguana to get that big. I'll be married by then and probably living in my own house. and his mom's replies: How are you going to get a girl to marry you when you own a giant reptile? will have kids in hysterics as the negotiations go back and forth through notes. And the lively, imaginative illustrations show their polar opposite dreams of life with an iguana.

Karen Kaufman Orloff is the author of many books for children including I Wanna Iguana, I Wanna New Room, and I Wanna Go Home, all inspired by her son's pet iguana who quickly grew to be over four feet long and take over his room. She also writes a humorous column on family life every other week for The Poughkeepsie Journal.

David Catrow is the illustrator of many picture books including Stand Tall, Molly Lou Melon and its sequel Have Fun, Molly Lou Melon, written by Patty Lovell; I Wanna Iguana and its two companion books I Wanna New Room and I Wanna Go Home, written by Karen Kaufman Orloff; Our Tree Named Steve by Alan Zweibel; The Middle Child Blues by Kristyn Crow; and We the Kids: the Preamble to the Constitution. He lives in Ohio with his wife, Deborah.
Loading...
or support indie stores by buying on