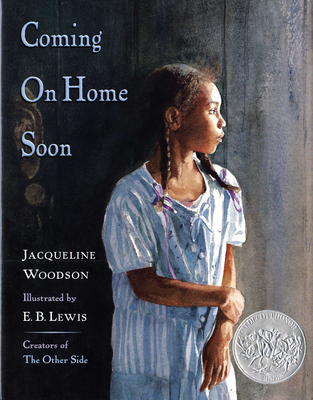 Ada Ruth's mama must go away to Chicago to work, leaving Ada Ruth and Grandma behind. It's war time, and women are needed to fill the men's jobs. As winter sets in, Ada Ruth and her grandma keep up their daily routine, missing Mama all the time. They find strength in each other, and a stray kitten even arrives one day to keep them company, but nothing can fill the hole Mama left. Every day they wait, watching for the letter that says Mama will be coming on home soon. Set during World War II, Coming On Home Soon has a timeless quality that will appeal to all who wait and hope.

Praise For Coming on Home Soon…

* "Woodson and Lewis tell a moving historical story of longing and separation. [The] period and place are wonderfully specific; the yearning is timeless."—Booklist, starred review

* "Perfectly matched words and illustrations masterfully bring to life all the emotions that the girl is experiencing as she, her grandmother, and a stray kitten that has come to stay all try to comfort and console one another."—School Library Journal, starred review

E. B. Lewis has illustrated more than fifty picture books, including Coretta Scott King Illustrator Award winner Talkin' About Bessie (by Nikki Grimes) and Caldecott Honor winner Coming On Home Soon (by Jacqueline Woodson). He taught art in public schools for twelve years, and currently teaches at the University of Arts in Philadelphia. He lives in Folsom, New Jersey.
Loading...
or support indie stores by buying on