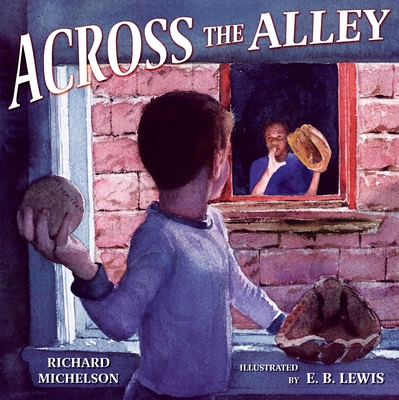 True friendship can cross any divide.

Abe and Willie live across the alley from each other. Willie is black and Abe is Jewish, and during the day, they don't talk. But at night they open their windows and are best friends. Willie shows Abe how to throw a real big-league slider, and Abe gives Willie his violin to try out. Then one night, Abe's grandfather catches them—will Abe and Willie have the courage to cross the alley and reveal their friendship during the day?

Like the bestselling The Other Side, E. B. Lewis's striking, atmospheric watercolors bring to life a moving story of baseball and music, and how two young people try to bridge the divide of prejudice.

Richard Michelson is the author of several picture books. He is also an accomplished poet and owns the R. Michelson Gallery in Northampton, MA, which often features children’s book illustrations. Find out more at www.rmichelson.com.
Earl Bradley Lewis was born on December 16, 1956, in Philadelphia, PA. As early as the third grade he displayed artistic promise. Inspired by two uncles, who where artists, Lewis decided he wanted to follow in their footsteps.