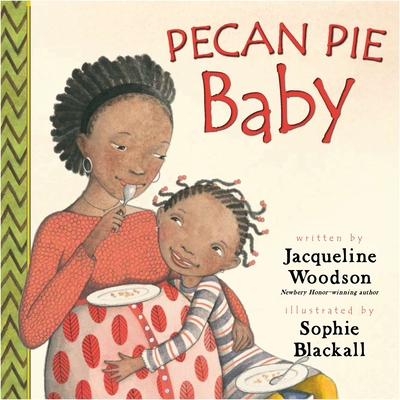 Gia is tired of hearing about the new baby. It hasn't even been born yet, but everyone, even her friends, seem fixated on it. Gia thinks things are fine just the way they are! And she's worried: if the baby's such a big deal now, what's going to happen to Gia's nice, cozy life with Mama once it's born?

Beloved author Jacqueline Woodson and Sophie Blackall have created a heartwarming story for kids adjusting to the idea of a new family member. Young readers will be reassured by Gia's eventual understanding that the baby won't ruin the special bond she has with her mom, and might even be a sweet addition to the family.

* “Gia’s narrative voice is prime Woodson—lyrical, colloquial, and imbued with the authentic feelings of a child.”—The Horn Book, starred review

Sophie Blackall (www.sophieblackall.com) is the illustrator of several award-winning picture books, including Meet Wild Boars by Meg Rosoff, Big Red Lollipop (by Rukhsana Khan), and the Ivy and Bean books by Annie Barrows, and she wrote and illustrated The Baby Tree. Her many honors include a BCCB Blue Ribbon, Ezra Jack Keats New Illustrator Award, Society of Illustrators Founders Award, Publishers Weekly Best Children’s Book, Book Sense 76 Pick, and New York Times Top Ten Picture Book. Her artwork has also appeared in murals as part of the New York City MTA’s “Arts for Transit” program. Previously she has had jobs in a shoe shop and a robot factory. She lives in Brooklyn, New York.
Loading...
or support indie stores by buying on