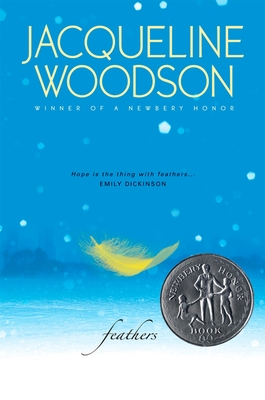 “Hope is the thing with feathers” starts the poem Frannie is reading in school. Frannie hasn’t thought much about hope. There are so many other things to think about. Each day, her friend Samantha seems a bit more “holy.” There is a new boy in class everyone is calling the Jesus Boy. And although the new boy looks like a white kid, he says he’s not white. Who is he?

During a winter full of surprises, good and bad, Frannie starts seeing a lot of things in a new light—her brother Sean’s deafness, her mother’s fear, the class bully’s anger, her best friend’s faith and her own desire for “the thing with feathers.”

Jacqueline Woodson once again takes readers on a journey into a young girl’s heart and reveals the pain and the joy of learning to look beneath the surface.