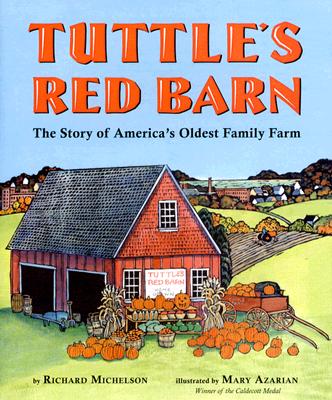 In 1632, John Tuttle set sail from England to Dover, New Hampshire. There he set up a farm on seven acres of land. From those humble beginnings the Tuttle family story became America's story.

As the Tuttles passed down the farm, along the way they witnessed the settlement and expansion of New England; they fought in the American Revolution; they helped runaway slaves along the Underground Railroad and sold maple syrup to Abraham Lincoln; they bought the first Model T in that Dover; and they transformed the old barn into the thriving country store it is today.

With Caldecott Medalist Mary Azarian's evocative woodcuts and Richard Michelson's moving prose bringing the Tuttle story to life, readers will be enraptured by the panorama of American history as seen through the eyes of one family.

When John Tuttle arrived in Dover, N.H., in the 1600s, cleared some land and built a cabin, he had no way of knowing how many future Tuttles would benefit from his actions. So far, 12 generations have lived on what became America’s oldest family farm, and each learns, grows and adds their experiences in this chronicle of a farm and family. In tracing the history of the land and people—each generation receives a minimum of one spread each—Michelson also relates American history as it affects each set of occupants through their eyes, covering tension between the settlers and Indians, the Revolutionary and Civil Wars, the Underground Railroad, the changing economy, the appearance of the first automobile and the development of the current store. Azarian’s signature woodcut prints add an appropriately warm and folkloric touch. Perhaps more information about Indians and how they did not generally instigate conflict could be included, but otherwise a flawless work—recommended for both home and school reading. —Kirkus, starred review