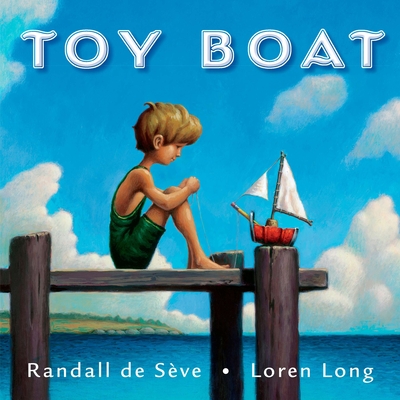 A little boy has a toy boat. He made it out of a can, a cork, a yellow pencil, and some white cloth. The boy and his boat are inseparable, until one day when the wind pushes the toy boat out into the wide lake. Alone now, the little boat must face fierce waves, a grumpy ferry, a sassy schooner, and a growling speed boat. How the little boat misses the boy! But if he is going to survive, he must figure a way to do it on his own.

Loren Long has a timeless and magical touch. As he did with The Little Engine That Could, he creates a world of toys and children that go right to the soul. Toy Boat will sail into young hearts and stay there.

* "With plenty of buoyant charm and imaginative artwork, this contemporary Little Toot has an abundance of child appeal."--Booklist, starred review


Praise For The Toy Boat…

* "The streamlined text is straightforward, letting the amazing art do much of the work. Long's acrylic, hyperrealistic pictures, awash with many shades of blue, are so substantial they seem to be molded from clay, and his expansive double-page spreads effectively convey the perspectives and differences in the size between the full-size boats and the boy's beloved toy. A harmonious ending brings the story full circle. With plenty of buoyant charm and imaginative artwork, this contemporary Little Toot has an abundance of child appeal."--Booklist, starred review