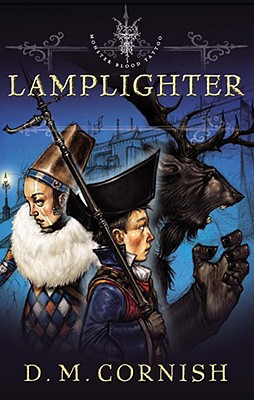 Continuing the absorbing, inventive saga started in Foundling, Lamplighter follows Rossam?nd Bookchild, now one of the EmperorOs lamplighters, who is sworn to protect travelers from the ferocious bogles that live in the wild. Small and meek, he does not fit in. Then a haughty young female monster hunter is forced upon the lamplighters for training. As Rossam?nd begins to make new friends in the dangerous world of the Half-Continent, he also seems to make more enemies, finding himself pushed toward a destiny that he could never have imagined. . . .

D.M. Cornish was born in time to see the first Star Wars movie. He was five. It made him realize that worlds beyond his own were possible, and he failed to eat his popcorn. Experiences with C.S. Lewis, and later J.R.R. Tolkien, completely convinced him that other worlds existed, and that writers had a key to these worlds. But words were not yet his earliest tools for storytelling. Drawings were.He spent most of his childhood drawing, as well as most of his teenage and adult years as well. And by age eleven he had made his first book, called -Attack from Mars.- It featured Jupitans and lots and lots of drawings of space battles. (It has never been published and world rights are still available.)He studied illustration at the University of South Australia, where he began to compile a series of notebooks, beginning with #1 in 1993. He had read Mervyn Peake's Gormenghast novels, The Iliad, and Paul Gallico's Love of Seven Dolls. Classical ideas as well as the great desire to continue what Mervyn Peake had begun but not finished led him to delineate his own world. Hermann Hesse, Kafka and other writers convinced him there were ways to be fantastical without conforming to the generally accepted notions of fantasy. Over the next ten years he filled 23 journals with his pictures, definitions, ideas and histories of his world, the Half-Continent.It was not until 2003 that a chance encounter with a children's publisher gave him an opportunity to develop these ideas further. Learning of his journals, she bullied him into writing a story from his world. Cornish was sent away with the task of delivering 1,000 words the following week and each week thereafter. Abandoning all other paid work, he spent the next two years propped up with one small advance after the other as his publisher tried desperately to keep him from eating his furniture. And so Rossamund's story was born - a labor of love over twelve years in the making.
Loading...
or
Not Currently Available for Direct Purchase