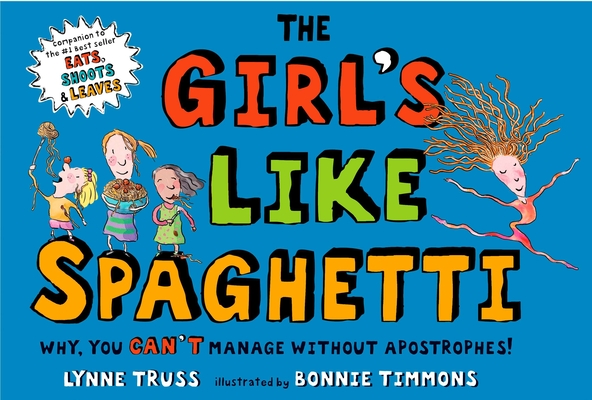 Why, You Can't Manage without Apostrophes!

A comanion to the best-seller Eats, Shoots & Leaves, this is punctuation play at its finest!

Just as the use of commas was hilariously demystified in Eats, Shoots & Leaves: Why, Commas Really Do Make a Difference!, now Lynne Truss and Bonnie Timmons put their talents together to do the same for apostrophes. Everyone needs to know where to put an apostrophe to make a word plural or possessive (Are those sticky things your brother's or your brothers?) and leaving one out of a contraction can give someone the completely wrong impression (Were here to help you).

Full of silly scenes that show how apostrophes make a difference, too, this is another picture book that will elicit bales of laughter and better punctuation from all who read it.

Lynne Truss is a writer and journalist who started out as a literary editor with a blue pencil and then got sidetracked. The author of three novels and numerous radio comedy dramas, she spent six years as the television critic of The Times of London, followed by four (rather peculiar) years as a sports columnist for the same newspaper. She won Columnist of the Year for her work for Women’s Journal. Lynne Truss also hosted Cutting a Dash, a popular BBC Radio 4 series about punctuation. She now reviews books for the Sunday Times of London and is a familiar voice on BBC Radio 4. She lives in Brighton, England.
BONNIE TIMMONS is best known for inspiring and creating images for the television show Caroline in the City and illustrating numerous national ad campaigns.
or support indie stores by buying on
Copyright © 2020 American Booksellers Association