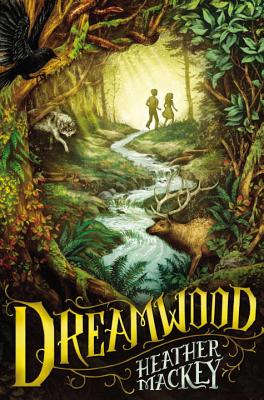 Lucy Darrington has no choice but to run away from boarding school. Her father, an expert on the supernatural, has been away for too long while doing research in Saarthe, a remote territory in the Pacific Northwest populated by towering redwoods, timber barons, and the Lupine people. But upon arriving, she learns her father is missing: Rumor has it he’s gone in search of dreamwood, a rare tree with magical properties that just might hold the cure for the blight that’s ravaging the forests of Saarthe.

Determined to find her father (and possibly save Saarthe), Lucy and her vexingly stubborn friend Pete follow William Darrington’s trail to the deadly woods on Devil’s Thumb. As they encounter Lupine princesses, giant sea serpents, and all manner of terrifying creatures, Lucy hasn’t reckoned that the dreamwood itself might be the greatest threat of all.

“An original fantasy for middle-grade readers plaits together science, the supernatural and deep ecology . . . The carefully plotted twists and turns will keep readers absorbed to the end. A stunning debut with equal parts originality and heart.”—Kirkus Reviews, starred review

After an early job counting dead bugs in an entomology lab, Heather Mackey realized she was better at making up stories about imaginary science than practicing the real thing. She lives in Northern California—with her husband and two kids—where she’s still perfecting the ultimate dance party playlist.
Loading...
or
Not Currently Available for Direct Purchase