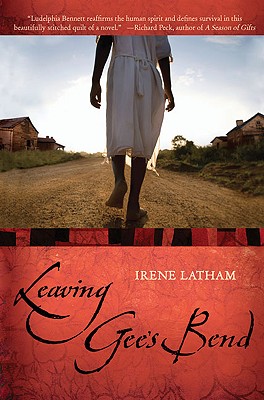 “Leaving Gee's Bend' is a fascinating story about Ludelphia Bennett, a 10-year-old daughter of a sharecropper set in 1930s Gee's Bend, Alabama. A great choice for middle readers, Leaving Gee's Bend will leave you cheering for young Ludelphia, and loving everything she loves about family, life, and the courage to persevere.”
— Linda Brown, Milestone Books, Inc., Vestavia Hills, AL
View the List

Ludelphia Bennett may be blind in one eye, but she can still put in a good stitch. Ludelphia sews all the time, especially when things go wrong.

But when Mama goes into labor early and gets deathly ill, it seems like even quilting won't help. That's when Ludelphia decides to do something drastic?leave Gee's Bend for the very first time. Mama needs medicine that can only be found miles away in Camden. But that doesn't stop Ludelphia. She just puts one foot in front of the other.

What ensues is a wonderful, riveting and sometimes dangerous adventure. Ludelphia weathers each challenge in a way that would make her mother proud, and ends up saving the day for her entire town.

Set in 1932 and inspired by the rich quilting history of Gee's Bend, Alabama, Leaving Gee's Bend is a delightful, satisfying story of a young girl facing a brave new world.

Irene Latham lives in Birmingham, Alabama, with her husband and three children. This is her first novel.
Loading...
or
Not Currently Available for Direct Purchase