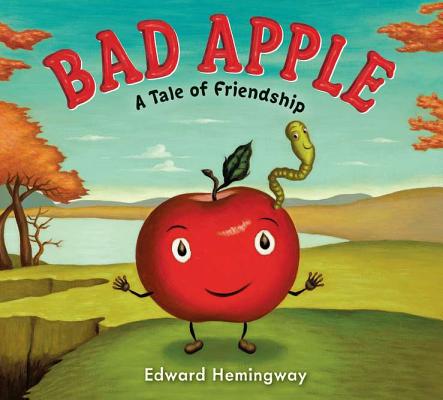 A Tale of Friendship

It takes a firm apple to stand up to bullies.

When Mac, an apple, meets Will, a worm, they become fast friends, teaching each other games and even finishing each other's sentences. But apples aren't supposed to like worms, and Mac gets called "rotten" and "bad apple." At first, Mac doesn't know what to do--it's never easy standing up to bullies--but after a lonely day without Will, Mac decides he'd rather be a bad apple with Will than a sad apple without.

Edward Hemingway's warm art and simple, crisp text are the perfect pairing, and themes of bullying and friendship are sure to hit readers' sweet spots all year round.

Praise For Bad Apple: A Tale of Friendship…

“The story works very nicely as a gentle celebration of friendship.” — Publisher's Weekly

"Hemingway's story of friendship against the odds is sweet." — Kirkus Reviews

"Charming . . . Social norms force Mac and Will apart; surprisingly effective, fruit-related pathos ensues before the two friends decide to buck convention and like whom they like. Who cares what anyone thinks?"—The New York Times

“The story works very nicely as a gentle celebration of friendship.”—Publishers Weekly

"Hemingway's story of friendship against the odds is sweet."—Kirkus Reviews

"Hemingway's oil illustrations are rich with autumn colors, and clever bits of action and humor conjure up a world children will want to return to. Meanwhile, the message about peer pressure comes through subtly but strongly."—Booklist
or
Buy Here
Copyright © 2020 American Booksellers Association