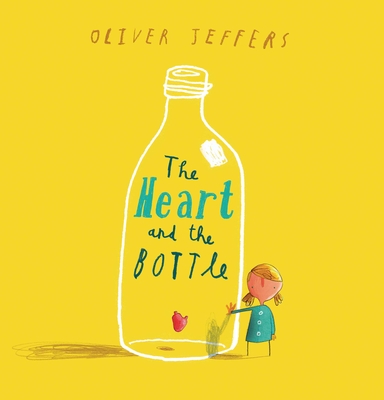 The Heart and the Bottle

“Oliver Jeffers is known for his unique perspective in both his story and illustrations, and The Heart and the Bottle is no exception. While some (young and old) may not fully comprehend the story, many will put the book down feeling as though they have just read something profound. This is one to absorb like a poem, let sink in like a fable, and treasure like classic.”
— Angela K Sherrill, 57th Street Books, Chicago, IL
View the List

There is a wonder and magic to childhood. We don’t realize it at the time, of course . . . yet the adults in our lives do. They encourage us to see things in the stars, to find joy in colors and laughter as we play.

But what happens when that special someone who encourages such wonder and magic is no longer around? We can hide, we can place our heart in a bottle and grow up . . . or we can find another special someone who understands the magic. And we can encourage them to see things in the stars, find joy among colors and laughter as they play.

Oliver Jeffers delivers a remarkable book, a touching and resonant tale reminiscent of The Giving Tree that will speak to the hearts of children and parents alike.