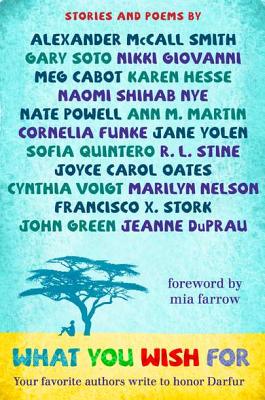 What You Wish For

A Book for Darfur

With contributions from some of the best talent writing for children today, What You Wish For is a compelling collection of affecting, inspiring, creepy, and oft-times funny short stories and poems all linked by the universal power of a wish - the abstract things we all wish for - home, family, safety and love.

From the exchange of letters between two girls who have never met but are both struggling with the unexpected curves of life, to the stunning sacrifice one dying girl makes for another, to the mermaid who trades her tail for legs, to the boy who unwittingly steals an imp's house, and to the chilling retelling of Cinderella, What You Wish For brings together a potent international roster of authors of note to remember and celebrate the Darfuri refugees and their incredible story of survival and hope.

Francisco Xavier Arguelles was born in 1953 in Monterrey, Mexico. Ruth Arguelles, his mother, was a single mother from a middle class family in Tampico (a city on the Gulf of Mexico). The reason that Francisco was born in Monterrey rather than in Tampico, where Ruth lived, is that her father did not want anyone to know that she was going to have a child out of wedlock. She was sent to Monterrey to live in a convent until the baby was born. The baby was supposed to be given up for adoption, but Ruth changed her mind. After a while, Grandfather Adalberto relented and mother and baby Francisco were allowed to come home.

Six years later Ruth married Charles Stork, a retired man more twenty years her senior. Charles Stork adopted Francisco and gave him his name. Charlie was a kind but strict Dutch man who quickly went about instilling needed discipline in his new son. For his seventh birthday, Charlie gave Francisco a portable typewriter because Francisco announced that he wanted to be a writer. After wandering about Mexico for a few years trying to live on a Social Security pension, Charlie decided to bring the family to the United States where he hoped they would fare better.

The three of them came to El Paso, Texas when Francisco was nine. Charlie, an American citizen was able to obtain the necessary visas for Ruth and Francisco. Francisco was sent to grammar school where he learned English on the go. Unfortunately, no one was willing to give the sixty-five-year-old Charlie a job and so it became even harder for the family to survive in the United States. They lived in a variety of apartments and trailer houses staying in each for as long as possible before getting evicted.

When Francisco was thirteen, Charlie Stork died in an automobile accident. Ruth decided to stay in the United States. She and the boy obtained an apartment in one of the public housing projects of El Paso. Francisco was awarded a scholarship to the local Jesuit High School and soon rose to the top of his class. During his senior year, he received an Honor’s Scholarship (full tuition and living expenses) to attend Spring Hill College, a small Jesuit College in Mobile Alabama.

At Spring Hill College, Francisco majored in English Literature and Philosophy and received the college’s creative writing award. After college, a Danforth Fellowship (awarded to 40 college seniors out of approximately 5,000 applicants) allowed him to attend graduate school at Harvard University. At Harvard he studied Latin American Literature with people like Octavio Paz, the Mexican Nobel Laureate. However, the emphasis on scholarly research and writing seemed too remote and irrelevant to all that was important. So, after four years of Harvard, Francisco went to Columbia Law School. His plan was to make a living as a lawyer without abandoning his plan to write fiction. Twenty years and twelve or so legal jobs later, Francisco published his first novel.

Francisco Stork is the author of two novels. The Way of the Jaguar was published in 2000 and was the recipient of the Chicano/Latino Literary Prize. It is the story of Ismael Díaz, a Mexican-American man awaiting execution in a Texas prison. Ordered by the Commissioner to write for two hours each day, Díaz tells the story of his demise from prominent real estate attorney in Boston to a desperate search for the love of his youth in the seedy brothels of Mexico.

Behind the Eyes, Francisco’s second novel, was published in June 2006. Behind the Eyes is the story of sixteen-year-old Hector Robles, an intelligent Chicano kid who tries very hard, but ultimately to no avail, to stay clear of the violence that surrounds him. Hector ends up in a reform school in San Antonio where he learns to live with courage and hope. Behind the Eyes was based on Francisco’s experiences living in the projects of El Paso.

Francisco works as an attorney for a state agency that develops affordable housing. He is married Jill Syverson-Stork. They live in Massachusetts. He has two children who are now adults.

John Green is the author of Looking for Alaska and An Abundance of Katherines. He lives in New York City.
In addition to many prize-winning and bestselling novels, including We Were the Mulvaneys, Black Water, and Because It Is Bitter and Because It Is My Heart (available in Plume editions), Joyce Carol Oates is the author of a number of works of gothic fiction including Haunted: Tales of the Grotesque (Plume), a 1995 World Fantasy Award nominee; and Zombie (Plume), winner of the 1996 Bram Stoker Award for Best Horror Novel, awarded by the Horror Writers' Association. In 1994, Oates received the Bram Stoker Lifetime Achievement Award in Horror Fiction. She is the editor of American Gothic Tales and her latest novel is Broke Heart Blues (Dutton). She lives in Princeton, New Jersey.
Born and raised in New York City, Jane Yolen now lives in Hatfield, Massachusetts. She attended Smith College and received her master's degree in education from the University of Massachusetts. The distinguished author of more than 170 books, Jane Yolen is a person of many talents. When she is not writing, Yolen composes songs, is a professional storyteller on the stage, and is the busy wife of a university professor, the mother of three grown children, and a grandmother.

copyright ? 2000 by Penguin Putnam Books for Young Readers. All rights reserved.
Born in Fresno, California to Mexican American parents, Gary Soto learned the hard work ethic through his share of chores, including mowing lawns, picking grapes, painting house numbers on street curbs, and washing cars. His hard work paid off at California State University at Fresno, from which he graduated with an English degree, and later at the University of California at Irvine, where he earned a Masters of Fine Arts in Creative Writing.