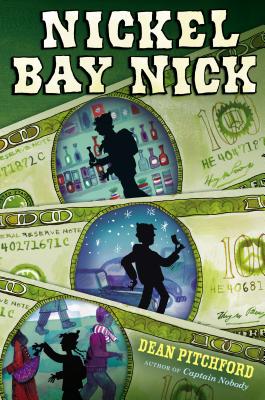 "Perfect for fans of Jerry Spinelli and Gary D. Schmidt, this heartfelt coming-of-age story will make you believe in the power of second chances."
Eleven-year-old Sam Brattle is already having the worst Christmas ever his dad's bakery is going bankrupt and his mom is spending the holidays with her new family. To make things worse, Nickel Bay Nick, the anonymous Good Samaritan who leaves hundred-dollar bills around Nickel Bay at Christmastime, is a no-show, so this year the rest of the town is as miserable as Sam. When he stumbles upon the secret identity of this mysterious do-gooder, Sam is stunned to learn that he might now be his town's only hope. But before he can rescue Nickel Bay, Sam has to learn the skills of a spy and unravel some even darker secrets that will change his life forever.

Dean Pitchford (www.deanpitchford.com) is the author of "Captain Nobody" and "The Big One-Oh" and also an Oscar(r)-winning songwriter. He wrote the lyrics to the Oscar(r)-winning song Fame, and the screenplay and lyrics for the hit movie "Footloose." Most recently, he has been involved with the stage musical version and new film adaptation of "Footloose "as well as the new Broadway revival of the musical, "Carrie.""

From SCHOOL LIBRARY JOURNAL:
“Told with wry humor, this fast-paced novel will appeal to fans of Louis Sachar’s Holes and Gary D. Schmidt’s Okay for Now.”


From KIRKUS REVIEWS:
“There’s a real cinematic feel here—Pitchford also writes for the screen and stage . . . . Sam’s a great, well-realized kid, and readers will root for him every step of the way. A surprising, poignant twist at the end explains Mr. Wells’ true motives for involving Sam and brings about a satisfying, uplifting finale. Crime does pay off—to the benefit of others—in this enjoyable novel.”

Praise for Dean Pitchford’s CAPTAIN NOBODY:

From KIRKUS REVIEWS:
“…the humor and compassion are sure to appeal to reluctant readers.”


From SCHOOL LIBRARY JOURNAL:
“[Captain Nobody] reads like a summertime feel-good movie. Kids who have longed for their own superhero powers will eat this up.