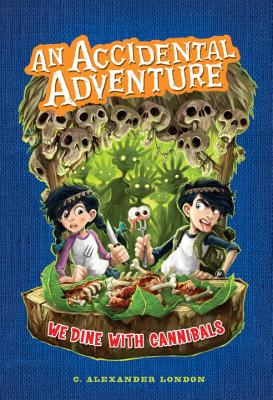 We Dine with Cannibals (Hardcover)

When we last saw Oliver and Celia Navel, they had fallen into the clutches of Sir Edmund S. Titheltorpe-Schmidt III and were doomed to spend their entire summer vacation doing his deadly bidding.
In their second unwanted adventure, "We Dine with Cannibals," Oliver and Celia will travel from the ruins of ancient temples to the shadowy forests of the Amazon. They'll need all their reality TV survival skills when they ride a llama, race the rapids, and even fly an airplane If that's not enough excitement for you (it is decidedly too much excitement for Oliver and Celia Navel), they'll be forced to learn the proper etiquette for a cannibal feast and confront the strangest and most brutal rite of passage ever devised by human imagination: dodgeball.
The second installment of the Accidental Adventures series is just as funny, just as exciting, and just as kid-friendly as the first.

C. Alexander London is an award-winning author of nonfiction for grown-ups, an accomplished skeet-shooter, and a fully licensed librarian. He has watched television in twenty three countries, survived a volcano eruption, a hurricane, four civil wars, and a mysterious bite on his little toe. He lives in Brooklyn, New York.
or
Not Currently Available for Direct Purchase
Copyright © 2020 American Booksellers Association