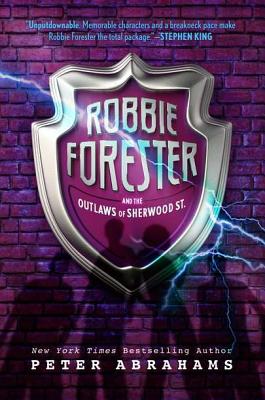 Robbie Forester and the Outlaws of Sherwood St. (Hardcover)

Stephen King's "Favorite American Suspense Novelist" is launching a new series for middle graders
Robbie Forester always knew life wasn't fair, but she never thought she could do anything about it. Until one day a powerful charm comes into her possession, a charm that guides her, her three friends, and her dog Pendleton on the path to justice. But the charm doesn't seem to understand that the path has gotten dangerous, and Robbie and her friends find themselves in a menacing world of thievery, arson, big yachts, and even bigger bank accounts. Will Robbie and her band of thieves end up in more trouble than they ever could have imagined? Edgar Award winning novelist Peter Abrahams weaves a tale of action, adventure, danger, and magic that keeps readers on the edge of their seats, guessing at every turn.
"Unputdownable. Memorable characters and a breakneck pace make Robbie Forester the total package." - Stephen King.

Peter Abrahams (www.peterabrahams.com) has written many books for kids, adults, and teens. "Down the Rabbit Hole," the first book in his New York Times bestselling Echo Falls series, won an Agatha Award and was an Edgar Award nominee, and his novel "Reality Check" won the 2010 Edgar Award for best young adult mystery novel. He is also the author of the New York Times bestselling Chet & Bernie mysteries under the pen name Spencer Quinn. Peter lives in Falmouth, Massachusetts.
or
Not Currently Available for Direct Purchase
Copyright © 2020 American Booksellers Association