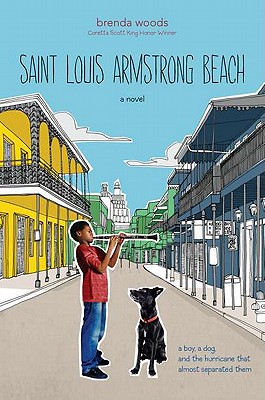 The gripping story of a boy, a dog and a hurricane Saint is a boy with confidence as big as his name is long. A budding musician, he earns money playing clarinet for the New Orleans tourists. His best friend is a stray dog named Shadow, and it's because of Shadow that Saint's still in town when Hurricane Katrina hits. Saint's not worried about the hurricane at first--he plans to live to be a hundred just to defy his palm-reader friend Jupi, who told him he had a short life line. But now the city has been ordered to evacuate and Saint won't leave without Shadow. His search brings him to his elderly neighbor's home and the three of them flee to her attic when the waters rise. But when Miz Moran's medication runs out, it's up to Saint to save her life--and his beloved Shadow's.

Brenda Woods, whose family hails from New Orleans, is the author of Coretta Scott King Honor winner The Red Rose Box and ALA Quick Pick Emako Blue. She lives in the Los Angeles area.

"Readers will quickly take a shine to Saint. . . . The food, music, and tempo of New Orleans all come to life. . . . While the tragedy of the event is not glossed over, the overall theme is one of hope."
-School Library Journal, starred review

"Provides a vivid description of what life was like in pre-Katrina New Orleans, and how quickly peoples' lives were shattered. The characters are well-developed, and readers truly will care about their fates."
-Library Media Connection, starred review

"Spare, moving. . . . Carefully crafted backstory. . . . Vividly portrays the force of the storm, and the authentic New Orleans setting works as a powerful character, adding an extra dimension."
-The Horn Book

"As the water rises, so does the suspense. . . . What lies at the heart of this story rings true: Saint's love for his neighborhood and his hard-earned hope for the future."
-Booklist

"Will obviously beg comparison with Jewell Parke Rhodes's Ninth Ward. . . . Both books are solid reads that feature likable protagonists with distinctive, readable voices, and emphasize the importance of faith, community, and resilience."
-The Bulletin of the Center for Children�s Books

"Woods concludes on a realistically uncertain note. . . . Saint is an easy protagonist to love."
-Publishers Weekly